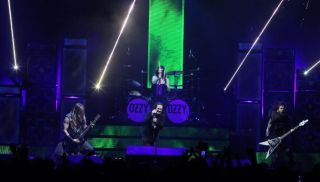 Ozzy Osbourne kicked off the North American leg of his No More Tours 2 tour in Allentown, Pennsylvania last night. You can watch fan-filmed footage of the set opener, “Bark at the Moon,” below:

Osbourne’s band for No More Tours 2 features guitarist Zakk Wylde, bassist Blasko, drummer Tommy Clufetos and keyboardist Adam Wakeman. Earlier this year Guitar World spoke to Ozzy and Zakk about the tour. When asked whether he might get emotional at the last show of the outing, which is rumored to possibly be his final tour, Ozzy responded:

“I don’t know. When I did the last Sabbath tour, I thought, I’ve been doing this for 50 years. I was with the band for 10 years [Osbourne departed Black Sabbath in 1979]. I’m not going to get emotional. But you know what? I got very emotional. The last gig we did was in Birmingham, where we started. The whole thing had come full circle. I must confess, I had a lump in my throat when I was singing “Paranoid” with them for the last time. Maybe I’ll get emotional this time. It’s been an incredible journey for me. I know it sounds like I’m gonna die or something. I mean, I hope I don’t die—not yet anyhow.”

As for what he felt Wylde brings to his music, Ozzy said: “Zakk is headstrong. He will not lie down, and you can’t stop him. He just plows ahead with whatever he’s doing. I played six gigs with him last year, and I couldn’t believe how great he was. He had done this tour with Yngwie and Steve Vai and all these guys, and it must have made him get better, if you can believe it. He blew my fucking mind. That’s the thing about Zakk—he takes it to another level.

Asked about Ozzy’s importance as a singer, Wylde replied: