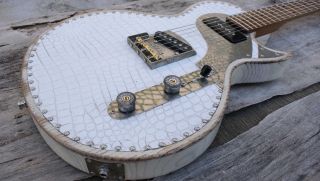 Like all of Paoletti’s models, the new guitar boasts a body made of chestnut wood reclaimed from 130 to 150-year-old wine barrels - which, in addition to looking pretty cool, offers unique tonal qualities, according to company founder Fabrizio Paoletti.

“Chestnut is alive - it breathes,” he told Guitar Player. “It’s a wood that brings a high number of harmonics, which I think is something that is very important, and it is also the king of sustain. There is a focus on middle-bass frequencies, but the tone is also malleable, depending on the other woods used in the guitar.”

In addition to that very old and very alive body wood, the single-cut model features a roasted Canadian maple neck, an aged nickel pickguard, a white croc pattern Italian leather top and a 4tus logo laser-engraved on the headstock.

There’s also a pair of patented handmade pickups with custom electronics personally designed by the Gn'R guitarist, who explains, “the reverse angle on the tele bridge pickup gives the low end more attack and clarity where the top strings are warmer.”

For more information on the Richard Fortus Signature #2, head to Paoletti Guitars.