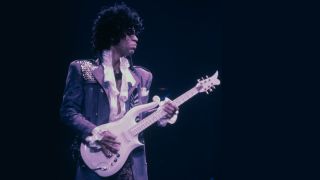 “Prince had been coming to the store that I worked at - Knut Koupee in Minneapolis - as far back as his high school days,” recalls Dave Rusan, the builder of Prince’s iconic Cloud guitar.

“We all knew that he was a talented guy. My first personal encounter with him was when I tried out for his band shortly after the release of his first album.”

It was this longstanding relationship that led to the creation of one of the most iconic electric guitars to ever grace the stage - that stage being Minneapolis’s First Avenue nightclub in the 1984 film Purple Rain.

Yet as it turns out, Prince’s design brief for the guitar was, well, brief.

“Many of the design features of his Cloud guitar were based on a bass guitar called a Sardonyx that he had bought a few years before,” Rusan tells GW.

“His instructions were to reimagine it as a guitar, and he specified that it should be white, have gold-plated hardware and EMG pickups.”

In the years following the film, Rusan made two more for the Purple One, and a fourth for a contest in 1985, with few Clouds produced until Prince’s passing in 2016, when demand for the luthier’s $8,000 replicas surged.

“I’ve been building replicas of the Cloud occasionally over the years since I did the ones for Prince,” says Rusan.

“It became more of a full-time endeavor after Prince’s death when interest in them took off. I’ve built around 15 so far and have orders for another 15.”

Rusan trademarked the design in early 2018, but has since received a letter from Paisley Park, ordering him to stop producing the model and give up his trademark - no doubt related to the fact that Prince’s official website has begun selling its own Schecter-built replicas for $1,750.

“The goal as to my dealings with Paisley Park is to resolve this conflict in a way that is equitable to both parties,” says Rusan.

“I want nothing from them other than to be left alone to make my guitars for appreciative fans of Prince and the guitar I made him to play in Purple Rain.”

Should the dispute continue, Rusan has been contemplating his options, including starting a petition, or utilising crowd-funding to raise funds for a legal case. Regular updates are available via the Rusan Guitarworks Facebook page.

Paisley Park Estate has yet to comment on its communications with Rusan.