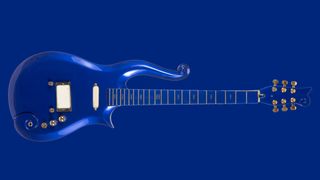 We recently reported on Prince’s custom-made and long lost “blue angel” guitar, which was up for sale at Julien’s as part of its Music Icons auction.

The blue angel is the third Cloud guitar auctioned by Julien’s. In 2017 the auction house sold a teal Cloud guitar for $700,000, the world record for the highest price ever paid at the time for a Prince guitar. In 2018, Julien’s auctioned a yellow Cloud for $225,000.

The blue angel wasn’t the only big-ticket guitar sale at the Music Icons auction. Kurt Cobain’s 1959 Martin D-18E acoustic guitar, which he played at Nirvana’s MTV Unplugged in New York concert, went for $6,010,000.

That figure makes the acoustic the most expensive guitar ever sold at auction, eclipsing the previous record-holder, David Gilmour’s 1969 Black Strat, which sold for $3,975,000 last year.