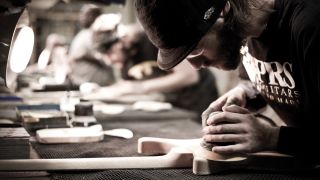 PRS recently cancelled and then relaunched its Experience PRS 2020 celebration as a virtual event in the wake of the coronavirus pandemic.

Now the electric guitar company has resumed operations at its Stevensville, Maryland headquarters, following the state’s decision to allow non-essential businesses to reopen.

According to a Reuters report, roughly 90 employees returned to the PRS factory last week, where work stations have been spaced six feet apart and one-way “traffic lanes” are outlined on the floor.

A 55-gallon drum of hand sanitizer is also on site, and some workers will shift to evening hours to reduce the number of people in the factory at one time.

Reuters also states that each employee must undergo a temperature check upon entering the facility, and that guitars are carefully sanitized each time they change hands from one worker to the next.

According to the report, PRS kept 374 workers on its payroll during the company's eight-week shutdown, taking on millions of dollars in debt in the process.

“It was a pretty powerful gut check about whether it was the right thing to do or not,” said Paul Reed Smith. “Then I found that some of the people would only get 25, 50 cents on the dollar with unemployment – that was unacceptable to me and the whole team here.”

Even while the last few months have been challenging, the article states that there have been some bright spots on the landscape. The Northern China region where some of PRS’ acoustic guitars are built was not significantly affected by the lockdowns, and online guitar sales have increased during the pandemic, giving PRS a six-month backlog of orders.

Said Smith, “Look, if you’re in any pain and you pick up a guitar that you love, your pain goes away.”

The guitar, he added, is “a wonderful device... and there’s no hangover.”