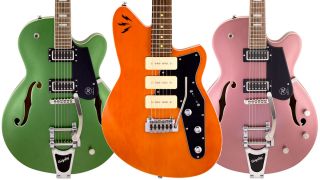 The Ron Asheton Signature Jetstream 390 is dedicated to the late Stooges guitarist, who played a Jetstream 390 during the band’s reunion shows in the early 2000s.

The Signature Jetstream 390 sports a korina body, medium oval roasted maple neck and 22-fret pau ferro fingerboard, as well as a trio of Reverend 9A5 P-90-style pickups and a Wilkinson WVS50 IIK tremolo.

The Pete Anderson Signature PA-1 RB, meanwhile, is a hollowbody model loaded with a pair of Reverend’s new-for-2020 Retroblast mini-humbuckers.

The guitar features laminated maple back and sides, a laminated spruce top, a medium oval three-piece korina neck and a 22-fret blackwood tek fingerboard, and is available in Satin Emerald Green and Satin Mulberry Mist.

Both guitars include a Boneite nut and locking tuners, Reverend’s Bass Contour Control and a dual-action truss rod.