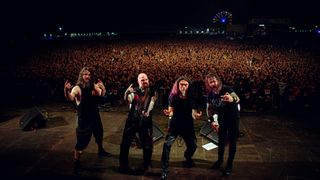 Slayer have announced the seventh and final leg of their farewell world tour, scheduled to kick off November 2 in Asheville, North Carolina and wrap November 30 in Los Angeles.

Dubbed “The Final Campaign,” the shows will feature support from Primus and Ministry, as well as Philip H.  Anselmo & the Illegals, who will perform sets featuring a “vulgar display of Pantera.”

Tickets go on sale July 12 at 10 A.M. local; limited VIP packages will be available. Head to Slayer.net for all ticketing and package details.

All confirmed tour dates can be viewed below.