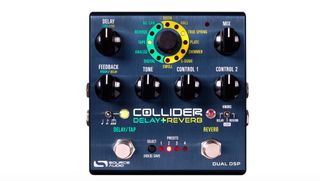 Source Audio has done fine work lately with cramming multiple effects into a single enclosure (see the C4 Synth and Spectrum Intelligent Filter), and now they’ve done it again with the Collider Delay+Reverb.

The new stereo effect pedal features a collection of the most popular delay and reverb effects from the company’s Nemesis Delay and Ventris Dual Reverb.

On the delay side, there are vintage tones inspired by the Maestro EP-3 Echoplex tape delay and the rare Oil Can delay, plus a classic analog bucket brigade circuit. More contemporary effects include digital delay and reverse delay.

As for reverbs, there’s the tried-and-true spring and plate, as well as the Lexicon Hall, natural replications of large and small acoustic spaces and ambient effects like shimmer, swell and E-Dome.

Switching between the two effects is excessively simple: Set the knobs toggle to delay and all controls are dedicated to that effect, including the central selector wheel; set it to reverb and, well, you get the picture. Put the toggle in middle 'lock' position and accidental knob bumps won't alter any sounds.

Like other Source Audio pedals, the Neuro Desktop Editor and Neuro mobile app can be downloaded for free for access to a library of presets created by both Source Audio and the Spectrum Intelligent Filter Neuro community.

The Collider connects to the Neuro Editor via the Collider's mini USB port or the Neuro Mobile App via the phone's headphone jack and Input 2 on the enclosure.

That’s a whole lot of pedal, and all for just $349. For more information, head to Source Audio.