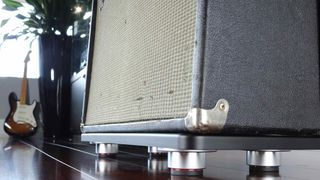 It’s easy to get wrapped up in picks, cables, speakers and the like in our quest for electric guitar tone, but one thing you might not have considered is speaker isolators - which, as it turns out, form an important part of Steve Vai, Derek Trucks and Susan Tedeschi’s guitar rigs.

IsoAcoustics’ Stage 1 Board pairs with the company’s Stage 1 isolators, but offers a portable platform for use with any amp up to 200lbs (90kg) in weight.