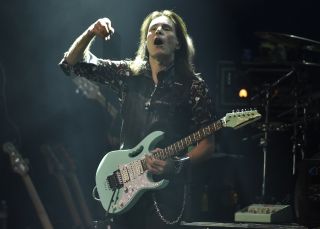 In addition to talking about the tour, Vai was also asked about helping to design the Ibanez Universe, the first mass-produced seven-string guitar, which helped to kick off the extended-range craze and influenced the sound of metal bands like Korn, among many others.

Vai recalled: “When I first designed the seven-string for Ibanez, I used it a particular way. I knew, instinctively, that if young musicians saw the potential in it for their ideas, it was going to evolve into something pretty incredible. That was made very apparent to me when I first heard Korn. They had taken the seven-string and taken that low potential way, way beyond what I was doing. That was a beautiful evolution to see.

"Then there was that whole underground movement of seven-string bands and players that created a whole subculture. But then based on the way us humans like to evolve our creativity, it went from seven strings to eight strings and there's people with nine strings. I knew that eventually somebody was going to come along and that seventh string or eighth string and start doing something even more unique than conventional metal at the time.”

Vai also discussed how he went about finding his own voice on the guitar:

There's always inspiration to be found in anything if you decide to look for it,” he said. “Les Paul had chops, then, all of a sudden you've got guys like Eddie Van Halen and Satriani and Yngwie who redefined what chops are. There's guys doing that now. When I started I was fascinated with having great control of the instrument and if I wanted to blow with crazy chops I wanted to have them. I worked really hard. I was taking my cues from the people that I was listening to in the Seventies, all the really great players like Jimi Hendrix, Jimmy Page, Brian May, Ritchie Blackmore. That's where I came into the world and took a look and started to take it from there in a sense.

“You can't pantomime somebody's musicality without sounding insipid. I was lucky enough to discover my own harmonic inner voice. But keeping chops up like that your whole life is tough. It requires a lot of time and focus. I have enough chops now where I'm satisfied but I'm most interested in evolving in the realm of phrasing.”

Vai is currently out on the Generation Axe tour. All remaining dates are below: