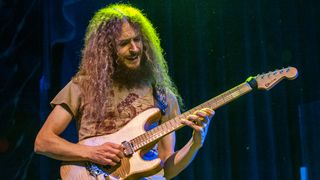 Best of 2019: We asked you for your favorite guitar solos from the past decade and you replied, in your thousands. Democracy is the only way we could sift through ten years of guitar playing to identify those moments that resonated.

Is this a vintage decade for the guitar solo? Arguably, yes. This list has a number of the usual suspects, shred veterans and rock icons whose influence on how we play guitar and how we see the instrument is immeasurable.

But it also has a bunch of players who have made their bones in this decade, who have put their own stamp on the instrument, developing new techniques, taking the established practices of old and augmenting them, reimagining them anew, finding new tones. From any era, that’s all you can ask for.

So this is it, the best solo of the decade, and it’s no surprise it comes by way of one of rock and metal’s apex shredders and the man you voted guitarist of the decade.

But maybe it’s fair if we split this award between Mark Tremonti and his six-string lieutenant and frontman Myles Kennedy, for the lead work on Cry of Achilles is very much a two-hander.

Arriving towards the tail-end of the epic progressive metal juggernaut that opens Alter Bridge’s 2012 album Fortress, Kennedy’s spare melodic phrasing sets the ground for Tremonti to put the afterburners on.

Speaking to Guitar World just a few days ago about this very track, Tremonti revealed that he would have played it a little differently if he had his time again.

“I knew that was going to be an important song so I was putting myself under a lot of pressure for that one,” said Tremonti.

“There’s a few notes in there that if I could go back and re-record it again I would play again or change but as a whole, I’m happy with it.”

Drive Home sees Steven Wilson at his most cinematic. Bittersweet and melancholy, and with a soupçon of Pink Floyd psychedelia by way of engineer Alan Parsons, it is a minor key epic that is perfect for Guthrie Govan’s dynamic playing.

Gilmour-esque in its restraint and phrasing, but not overly so, Govan’s solo is perfect for the song, which, if we’re being honest, is the only standard by which a guitar solo should be judged.

Another epic solo that shares space on record with Myles Kennedy - he is truly the Zelig of virtuoso lead playing - and puts the most persuasive case yet for shelling out for a Les Paul in Anaconda Burst.

Slash’s plays in the key of Tetris for this one, shifting back into the minor pentatonics every now and again, proving once more that he is the master of hard rock phrasing, and, what’s often underrated in lead playing, intonation. We marvel at Slash for being this more-than-human character, the wild thing, but he’s never so wild as to bend a note an eighth of a tone out of place. He’s the master.

Derek Trucks is the best slide player in the world, and you could make a persuasive argument for being the best player, too - no qualifiers needed. And it’s on moments such as this that you can hear why.

There are a lot of frequencies flying around with TTB, but Trucks always finds a space to complement them, and when given the chance to let loose, as here, he brings a vocal quality to his slide playing that takes the jam forward, raises the stakes emotionally, and brings the house down.

We are all going to be really bummed out when the aliens finally return and take John Petrucci back to his home planet. Honestly, it’s like he has five of E.T.’s fingers on that left hand of his.

On S2N, Petrucci bends the laws of physics to his will – such puny laws – with some real light up the galaxy lead playing. There’s an audible “wow” not-so-deep in the mix on this track. “Was it Owen Wilson?” the internet asked. Maybe. JP won’t say. Maybe it was all of us.

The tone master and blues-pop superstar has just got such an immaculate sense of phrasing and the ability to play so precise that it sounds and looks effortless. There’s no tension when you see him play this, and that’s by design.

There are very few players who capture the quiet euphoria of playing guitar and silence all the angst that comes with the effort of actually doing so. Mayer is one of them.

Big Wreck’s approach to hard rock evades easy comparisons. Sting and the Police, maybe? The playing is so meticulous throughout Ghosts (both the song, and the album) that you wonder if what Ian Thornley is going to come up with here, and it’s a tour de force of phrasing and minor key blues.

Again, perfect for the song, which is all that matters. A side note: the production on this album, courtesy of Thornley, Nick Raskulinecz and Eric Ratz, is a thing of wonder.

What brought the edge back? Maybe Kiko Loureiro, who is Megadeth’s most exciting lead player since Marty Friedman. The Brazilian guitarist’s note choices, reaching for exotic, are the perfect foil for Mustaine’s beastliness with the pentatonics.

The technique on show here verges on the ridiculous, as though Richardson was evolved from from a whole different strand of DNA. We need a paternity test to see if Petrucci is really his dad.

But seriously, though, this is the acme of contemporary shred, and the solo is delivered in what feels like a Aristotelian three-act structure. As one YouTube comment said, “Jason Richardson featuring Polyphia.” For a moment, it feels that way, yes.

No matter what time of day it is or where you are in the week, whenever you hear Eddie Van Halen clear some space in the jam for a solo it is immediately Friday Night.

What can you say? The tone makes it instantly recognizable, of course, the super-hot juice with the harmonics all ready to pop, but maybe its the mastery of freestyle feel and melodic responsibility, and the interplay between both, that make EVH the G.O.A.T.

Can he write a solo that can compete with 50 years of life-affirming and boundary-pushing rock? Yes he Canada!

Rush’s final studio album Clockwork Angels was a fitting send off for Willowdale’s most famous sons, a band who only got better with age, perhaps because they, of all progressively minded bands, were the most humanistic.

Lifeson typifies this in his note choices. All too often we can lose ourselves in the intellectualism regarding arrangements and so forth. But music is about moving people. Lifeson never forgot that.

Shred elder Steve Vai has a style that’s like mercury. Yeah, sure, instantly recognizable, unmistakably so, but - alas! - it’s ever-changing before your eyes.

But that said, Gravity Storm calls back to Vai’s early days in Whitesnake, in the company of David Lee Roth; it’s a hard rocking talky track, with a solo that’s got a lot to get off its chest.

Sauced with his signature wah, Vai’s conversational phrasing is evidence of a player who thinks outside of his instrument. “Do more, guitar. Do more!” It usually complies.

Even though Zakk Wylde’s turbo-charged and super-aggressive alternate picking has made an ideal companion to the work of Ozzy Osbourne and Black Label Society’s hydrocarbon rock, it’s on the quieter, more melancholy tracks that it really stands out.

Tracks such as Darkest Hour, which sees Wylde ably balancing the pyrotechnics with sentiment.

This decade has seen Mark Knopfler make some of the most interesting music of his career. He, like Rush on this list, seems to imbue his compositions with a sense of humanistic wisdom.

Broken Bones shuffles along in a strange rhythm of its own, setting the scene for Knopfler’s reflections, and a solo that never calls attention to itself, instead broadening and adding depth to the track.

Steve Vai famously declared Plini to be the future of guitar playing. Maybe it was tracks such as Handmade Cities that he had in mind.

It’s a song that sees Plini as his most rhythmically playful and melodically upfront with a truly lyrical solo that is of course on point with the technique but more so with a sensibility that feels like some future jazz that we don’t yet have the vocabulary to describe in words.

This is what Muse does best, partnering a Doctor Who sci-fi vibe with ethereal new-wave and stately prog-rock.

Tonally, Bellamy’s solo here has got elements of a robot Brian May using a fuzz pedal that was found in a meteorite, but he affords the solo’s rhythm as much attention as he might do a riff, momentarily changing the feel of Madness without losing its momentum. It’s somewhere between sleight of hand and just clever composition.

Eric Gales is a force of nature. This solo has the big bends that sound like he is trying to remove his bridge. It’s got the upper-register chord work. Its super-fast but never loses power. It’s got everything.

Joe Bonamassa says that Eric Gales is the world’s best blues-rock guitarist, and it’s difficult to argue with that. But the best thing is, you suspect the best is yet to come.

Shred’s high priest and sensei-in-chief takes the scenic route on Thunder High on the Mountain, a tour-de-force of his blockbuster style. He has a wayfaring approach to style.

It is mostly rock, sure, but he is forever bending pop-ish rock motifs out of shape, twisting melody into new forms, and finding inventive new contexts for his formidable musical vocabulary – like on the 16th note Mixolydian passage that concludes his solo with a folk-music-from-IC 1101 vibe. Not of this earth.

Kirk Hammett might be one of the most-famous guitarists in metal but there is still a feeling that in 2019 we under-appreciate him, just a little. Maybe it’s because of the attention he gets, and because he has always been here, because people are always critiquing his style – too much wah, a common brickbat – and surely there is a little envy at play.

The thing is, Kirk Hammett radiates soft power for Metallica; he is effortlessly cool, he uses just enough wah, and whenever he pokes his KH-1 above the trenches for a solo he dials in more excitement to the jam. He is excitement on-tap, a power-up, and a force for good.

20. Paul Gilbert – Atmosphere On The Moon

Something magical is going on with Paul Gilbert’s tone here. It’s scrunchy, slighty fuzzed, with slow and warm modulation, and it gives this work of late-night lounge jazz blues rock an offbeat vintage quality, as though it were from a history none of us lived through.

This is one of Gilbert’s finest moments on record, perfectly phrased, almost engaging shred-burn mode but resisting, because the song itself is just so, well, it's just so... delicious!