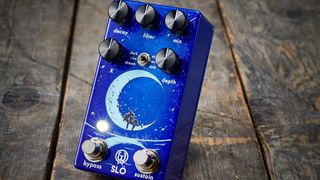 Last week, we presented Reverb.com’s list of the site’s best-selling guitar amps of 2019. Now, the digital gear marketplace has revealed another year-end best-of, this one focusing on the site’s top-selling effect pedals, both overall and for stompboxes new for 2019 (and as regular readers of this site are well aware, there were a lot – and we mean a lot – of pedals released over the past 12 months).

On the new for 2019 side, Walrus Audio’s Slo multi-texture reverb took top honors, while Chase Bliss Audio’s MOOD micro-looper/delay (which was recently released in a special Reverb 'blacked out' version) came in second.

The top five was filled out by Electro-Harmonix’s Attack Decay, EarthQuaker Devices’ Plumes and another EHX offering, the Bass Mono Synth.

And because there are just so, so many pedals both new and old out there in the, um, guitar world, Reverb also took it upon themselves to break down the top-selling units in six effect categories: Overdrive, fuzz, delay, reverb, chorus and compression.

To check out all the top sellers, head over to Reverb.com.