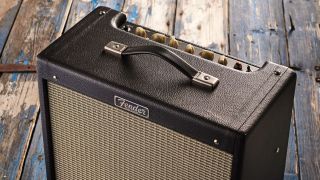 Here at Guitar World we can never get enough of year-end best of lists – especially when those lists are gearhead-centric.

With that in mind, Reverb.com recently released its list of the site’s best-selling guitar amps of 2019, encompassing both new and used sales.

It’s an interesting cross-section of brands and models, populated both by industry leaders like Fender, Vox and Kemper and outside-the-box surprises, such as Milkman Sounds’ The Amp guitar head pedal.

A particularly notable fact gleaned from the results is that, save for Kemper’s Profiler Powerhead, all of the entries fall squarely in the sub-$1,000 price range, demonstrating that, these days, you can get a great-sounding amp loaded with a ton of features without having to break the bank - as demonstrated in our guide to the best guitar amps under $500.

At the very top of the heap? Fender's Blues Junior, which, in Guitar World’s review, we called “a new benchmark for a portable workhorse combo with bolder, full-bodied tones and a natural-sounding reverb.”

In second place, meanwhile, is Boss’ super-versatile and incredibly affordable KTN-50 Katana, with the 100-watt combo version pulling in at number eight and the KTN-HEAD at 19.

Otherwise, the list is filled out by offerings from Peavey, Orange, Yamaha, Fishman, Roland, and lots and lots of Fender.

To check out the full top 20, as well as the site’s best-selling bass amps and amp brands, head over to Reverb.