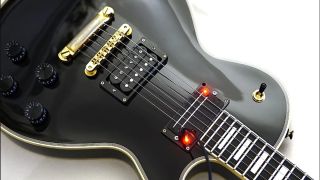 We’re already wholly impressed by A Little Thunder, the Andy Alt-designed pickup that allows electric guitar players to add bass frequencies to a signal via a standard-sized humbucker.

Now it appears that Alt is shipping A Little Thunder V2, which Guitar World first reported on last year, and the update looks to be incredibly cool.

The Billy Gibbons-favored A Little Thunder is a passive, blade-style “smart” humbucker that enables guitarists to drop the bottom one, two or three strings by -1 octave or -2 octaves. Additionally, there’s a “low note priority” option that detects the lowest note being played and drops only that note in order to avoid muddying up the tone.

Essentially, A Little Thunder is an added octave effect, but without the need for any outboard gear, and with the ability to assign the pitch-shifting to particular strings.

The new V2 version, meanwhile, promises a clearer signal and higher output than its predecessor, refines the low-note priority option, doubles the battery life of the pickup (roughly 16 hours of playtime in between micro USB charges) and also adds in Bluetooth support which, as Alt told us last year, will make it possible to introduce additional sounds via the pickup.

A Little Thunder also offers near-zero latency, is customizable with software and has four capacitive touch controls that eliminate the need for switches or knobs.

The new V2 model is currently shipping for $299. For more information or to purchase, head to A Little Thunder.