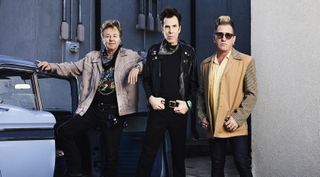 Following "Cat Fight (Over A Dog Like Me)" and "Rock it Off," "Cry Danger" is the third track the band has released from their upcoming album, 40. You can check it out below.

“This one is really different for us," Setzer told Guitar World about the song "Mike Campbell of the Heartbreakers came up with this crazy riff. It’s almost like a backwards ‘Day Tripper.'”

40, the band's first album of new material in 26 years, is set for a May 24 release via Surfdog Records. It was recorded in Nashville and produced by Peter Collins (Rush, Bon Jovi, The Brian Setzer Orchestra), with engineering by Vance Powell (Jack White, Chris Stapleton, Arctic Monkeys).

To preorder the album, step right this way.