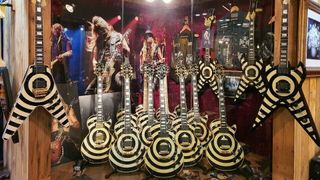 Then do we have the eBay lot for you.

Feast your eyes on what seller Hitchhikermusic is calling, and rightfully so, the world’s largest Zakk Wylde signature collection.

And since you’re going to need something to plug all that Wylde goodness into, Hitchhikermusic has also thrown in a Marshall JCM 800 Zakk Wylde Signature head and cabinet.

The entire lot, according to the seller, hails from the Zakk Guitar Gallery, an official Gibson dealer in South Korea.

Too bad – Hitchhikermusic also says they are not sold separately.

It’s all or nothing, but that’s the way it goes when you’re rolling Black Label. SDMF, as Zakk would say.

The lot is currently on eBay for $110,800. But that includes free shipping, which in this case is a hefty chunk of change.

For more information, head to eBay.