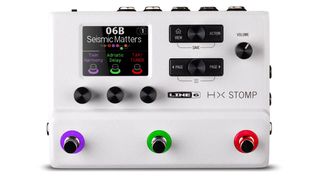 If you find your lack of a multi-effects pedal disturbing - and you’re after something with less of a dark-side aesthetic - Line 6 has unveiled a fresh new look for its hugely popular HX Stomp. Its name? Stomptrooper White.

Other than the Stormtrooper-esque finish, the HX Stomp is spec’d as per its altogether more Vader-vibed counterpart.

So, that means you get the same streamlined triple capacitive-footswitch setup, with space for 126 presets, four-cable amp integration, plus USB recording output.

And, naturally, there’s a staggering array of effects and amps on offer - over 300 at the latest count - which should cover just about any gig.

The HX Stomp in Stomptrooper White is available now for $649. Head over to Line 6 for more info on the HX Stomp series.