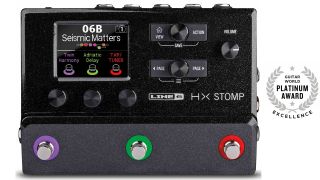 Comparing a product that does almost everything under the sun to a Swiss Army knife may be an overused cliché, but in the case of the Line 6 HX Stomp it’s hard to think of a better comparison. While this compact device is small enough to fit into a gig bag accessory pocket or squeeze onto a crowded pedalboard, it’s packed with a multitude of useful features and provides an impressive variety of functions that enable its use as a stomp box-style multieffects processor, complete guitar or bass rig, multichannel USB audio interface and more. The HX Stomp is also the most affordable way to access the sounds of Line 6’s Helix effects, amps and speaker cabinets that utilize the company's state-of-the-art HX modeling technology.

FEATURES Let’s start with those Helix models. Even though the HX Stomp is an affordable, compact product, it still provides all of the same effects offered in Line 6’s flagship Helix guitar processor, including many of their most popular “legacy” effects from the DL4, DM4, FM4 and MM4 stomp boxes and M5, M9 and M13 processors. Even more impressive is that HX Stomp offers dozens of brand-new models, including several obscure pedals like the Wounded Paw Battering Ram and amps like the Ben Adrian Cartographer. In all, HX Stomp offers well over 300 different models to build sounds from. The only “compromise” is that the maximum number of blocks that can be used to construct sounds (a block is any effect, amp, cab, mic or IR model) is six instead of 32, as in the high-end Helix products.

HX Stomp may be only as big as a midsize stomp box and have only three footswitches, six knobs and four pushbuttons, but don’t let its stomp-box-style appearance fool you. The unit really is a sophisticated guitar processor that functions more like a floor-mounted multieffects unit. In addition to pairs of stereo ¼-inch input and output jacks, HX Stomp also provides a stereo effect loop, MIDI In and Out/Thu jacks, a ¼-inch headphone output, ¼-inch dual expression pedal/footswitch jack (Two expression pedals, two footswitches, or one of each can be accommodated simultaneously) and USB. While you can go the simple route and just patch HX Stomp between your guitar and amp like a stomp box, it also welcomes more versatile routing setups such as sending specified effects blocks to an amp’s front input (like distortion, compression, wah or dynamic filters) while other blocks are routed to an amp’s effect loop (like delay, reverb or even amp models).

A full-color LCD makes it easy to operate and program the unit. The “home view” button returns users to the main page with a single press and toggles between the Edit View and Play View home pages. Three rotary knobs below the LCD adjust the parameters displayed directly above, and the knobs also can be pushed to engage or disengage functions. Users can get into some pretty deep programming from the front-panel LCD alone, but for those who prefer to dig even deeper the HX Edit application allows users to edit and set up the unit with a MacOS or Windows computer via USB.

PERFORMANCE Don’t let this unit’s small size and “Stomp” moniker fool you into thinking this is only an effects pedal to place on a pedalboard. HX Stomp is an extremely powerful guitar processor that can function as a rig entirely by itself when plugged into a sound system for performing live or a computer when recording. While you can certainly use it like a stomp box (and it sounds great doing that), this doesn’t take advantage of HX Stomp’s full potential, kind of like owning a Ferrari but only driving it 25 mph and never using its sport and race modes. The incredible dynamics, depth and realism of the Helix models truly come through either when HX Stomp is plugged into a guitar amp’s FX loop return or when it is connected to full-range powered speakers or a PA system.

If you also play bass, or if bass is your primary instrument, HX Stomp has plenty to offer as well. Line 6 did not skimp with HX Stomp’s selection of effects, amp and speaker cab models for bass, which is highly welcome news for low-end specialists.

● In addition to standard stereo inputs and outputs, an effect loop allows versatile, professional setups to maximize the sound quality and performance of pre- and post-effects and models.

● The USB jack enables HX Stomp to function as a multi-channel USB audio interface and to use the HX Edit application to program and set up the unit.

● A large full-color LCD makes it easy to program and operate the unit using the three multifunction knobs and front panel buttons.

● THE BOTTOM LINE: HX Stomp really is a full-function guitar processor in a stomp box’s clothing that provides the sounds and performance of full guitar and bass rigs and versatile functionality that’s equally at home on stage or in the studio.