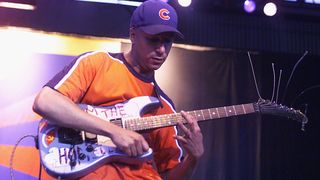 Tom Morello’s electric guitar playing style is founded around three core concepts: a molotov cocktail of killer riffs, Whammy pedal abuse and toggle switching - and now the Rage Against The Machine founder has revealed the unlikely origins of the latter technique.

During a recent Reddit Ask Me Anything, one fan asked about Morello’s kill-switching technique, to which the guitarist replied, “It’s not a kill switch; it is the toggle switch, standard issue.

“I stumbled upon this technique when I was in college. All the cool kids had the Eddie Van Halen guitar that only had one knob, volume. I was stuck with a very uncool Explorer guitar that had too many knobs and an unsightly toggle switch. I decided to find a use for it.”

It was this technique that Morello put to revolutionary use on Rage Against The Machine’s debut, best showcased on Bullet In The Head’s verse scratches and the thrilling climax of Know Your Enemy’s incendiary solo.

Prior to his college days, Morello wasn’t much of a guitar player, according to pal and former bandmate, Tool’s Adam Jones, who stated, “It’s just amazing to me now how much Tom sucked at that moment when I met him, and now no-one can touch him.”

Morello’s next venture is his Guitar Revolution camp, which takes place in January 2020 at Newport Beach, CA, and features the likes of Nuno Bettencourt, John 5, Billy Howerdel and many more.