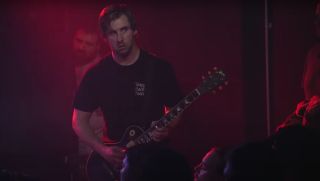 20 Buck Spin, the label that reissued Iron Age’s final album, The Sleeping Eye, last year, wrote on Instagram: “RIP Wade. So very grateful to you for giving me an opportunity to be a small part of the @realironage lore. Condolences to all his friends and family. Iron Age’s impact is huge and will reverberate in hardcore and metal for a long time to come.”

In an interview with Bandcamp about the 20 Buck Spin reissue of The Sleeping Eye, Allison said of the album, “From a stylistic side, going heavier, more epic, and more atmospheric meant the music was informed by a broader range of influences – whether that be from the various strains that evolved over the decades in the Black Sabbath lineage or from bands like Venom, Bathory, Celtic Frost, and Sodom, or from more epic bands.

”We wanted to make bigger, heavier, more substantial music with a stronger sense of its own atmosphere.”

Allison and Iron Age were also known to have been a major influence on Texas thrash act Power Trip, which suffered their own loss last month with the death of frontman Riley Gale, who was just 34.

In a 2017 interview with The Guardian, Gale said of the band: “Power Trip definitely wouldn’t be the band we are without Iron Age. Those guys are sort of like our older brothers, and showed me a lot of really good music, not just thrash metal but a lot of cool shit in general.”

Gale continued, “The way Wade Allison writes his riffs is like no other guitar player that I can name, and I think it’s insane to have had a band that had a style that was so distinctly their own. You cannot tell me that Iron Age sounds like any other band, or that any other band sounds like Iron Age – you hear people try, and it doesn’t work.

"That’s a one-in-a-million thing, and it’s an absolutely essential listen, especially if you’re like, ‘Oh, I like this Texas band Power Trip, who should I listen to that would even remotely strike a chord?’ – that would be the band, for sure.”

In addition to Iron Age, Allison also played in the metal bands Mammoth Grinder and Eternal Champion. At present, no cause of death has been given.