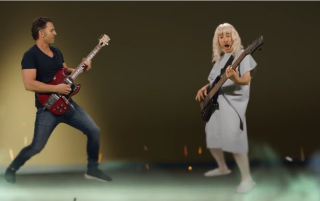 "MRI" features some fast-paced fretwork from Dweezil Zappa, who also makes a dramatic appearance in the song's video, which you can check out below.

"MRI" is one of the highlights from Smalls' first solo album, Smalls Change: Meditations Upon Ageing. Featuring a laundry list of six-string luminaries, such as Steve Vai, Joe Satriani, Steve Lukather and Dweezil Zappa, Smalls Change sprang from—in Smalls' own words—"a combination of desperation and opportunity."

When asked—in a recent GW interview—how he assembled such a star-studded group of musicians for his first solo album, Smalls said "I think they saw me, if not as a peer, at least as a commoner, and there was a marvelous spirit of generosity that seemed to be about when I made these phone calls."

"One of them summed it up very pithily when he said, 'It’s a pity fuck.' And I thought, well, god bless you."

You can read our full interview with Smalls right here.