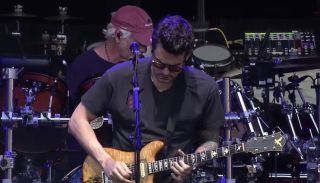 For the performance, Mayer used Jerry Garcia's legendary "Wolf" guitar, which is currently on display at the Play It Loud: Instruments of Rock and Roll exhibit at New York's Metropolitan Museum of Art.

You can watch Mayer play a few Grateful Dead classics on the guitar, including "St. Stephen" and "High Time," in the pro-shot livestream below.

Back in 2017, the Wolf guitar made headlines when it was sold for $1.9 million at auction, making it one of the most valuable guitars ever sold at the time.

Customized by luthier Doug Irwin, and labeled “D. Irwin 001," Wolf was first played by Garcia at a 1973 New York City performance the Grateful Dead gave for the Hell’s Angels. Garcia went on to use the guitar for countless performances and recordings over the following two decades.