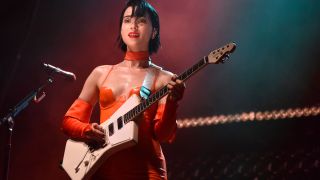 St. Vincent (aka Annie Clark) is one of the 21st century’s bona fide electric guitar heroes - clocking in at no 12 on our round-up of the past decade’s best guitarists - but she’s not exactly known for playing it safe when it comes to tone or technique. Yet the Masseduction hit-maker recently went back to perhaps the original guitar hero for an intimate, and spot-on, performance of Little Wing.

Ushering in the new year, Clark shared a video of her playing the Jimi Hendrix classic with the caption, “I’m celebrating New Years Day by misremembering Little Wing on a pitchy guitar. True joy.”

For the video, Clark put down her signature Ernie Ball Music Man model to pick up what looks like a beaten-up example of the obscure Fender Lead II - mostly likely the green model she used at the 41st Annual Kennedy Center Honors in December (see the image at the bottom of the page) - running into a subtle auto-filter for a sonically updated take on the intro to Hendrix’s original.

We’d say she nailed it - even though blues is something Clark has actively tried to avoid over the years.

In 2017, she told Guitarist magazine, “I did try to shy away from the pitfalls of the poorly played blues guitar.

“It’s fun to riff on the classic stuff that every guitar player knows, but I get away from that in particular because there is John Lee Hooker and there is Howlin’ Wolf, and I don’t think that that’s where I need to add to the conversation.”

Clark recently interviewed another guitar legend, Kirk Hammett, which allowed the metal icon to open up about his ideas getting shot down by Metallica’s “tone police”.