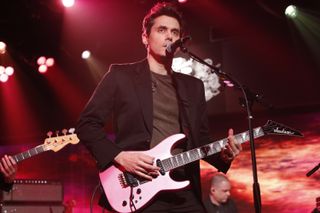 When it comes to John Mayer one thing’s for sure: for a guitar player, he gives a good interview.

Just the other day we reported on his conversation with Dean Delray for the Let the Be Talk podcast, during which Mayer affirmed his love for all things Strat-like – so much so that he says it hindered his ability to be a bigger Led Zeppelin fan, whose Jimmy Page mostly played Gibsons.

Now we’ve unearthed another electric guitar nugget from Mayer’s Let There Be Talk appearance, and this one has to do with the six-string that, he says, “changed him forever.”

And not only is he not referring to a Fender Strat, he also doesn’t mean his beloved PRS signature model, the hotly debated Silver Sky, or the PRS Super Eagle II, his main instrument for Dead & Company performances.

Rather, Mayer is referring to Jerry Garcia’s Wolf guitar, custom built for Jerry by luthier Doug Irwin, and which sold at auction in 2017 for a cool $1.9 million.

Mayer played Wolf live onstage with Dead & Company this past June during a gig at New York's Citi Field, and, he recalled to Delray, "Here's what changed me forever: the tone of this guitar was so good. It's the one that's married to those songs. You don't even know if an EMI console sounds good or not; The Beatles recorded on it, it sounded good.”

John Mayer: these are the three things amp modelers haven’t got right yet

"And all of a sudden, all I have to do is go 'bomp-bap-bomp-bap,' single notes, and I'm in heaven. And I realize, 'You got to get a guitar where the single notes make you happy.' You don't have to play that much at all."

Of course, as Mayer went on to explain, in the quest for good tone, one factor that doesn’t hurt is to just be, well, a good guitar player.

"Jerry Garcia played the guitar in this lighter way,” Mayer said. “It wasn't fiery, it was beautiful, it was bird-like; like birds are playing the guitar, and that has something to do wanting to hear it all the time because it's not adrenalized, it's a great way to look at it. I had to look it, like, 'Oh, a lot of these tones are quite pure, they're not in-between two pickups.'

"It's the way he played the guitar. If you're a good guitar player, you don't even need a good-sounding guitar, you'll find the one millimeter on the string over the pickup."