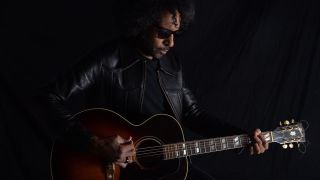 William DuVall is being driven north along the I-95 from New Jersey to Manhattan through late-afternoon traffic so we’ve got plenty of time to talk about his debut solo album, One Alone.

The album sees the Alice in Chains frontman pare everything back to just his acoustic guitar and voice, recording it in quick time over a couple of sessions.

Some of the tracks are barebones versions of songs DuVall wrote and performed with former band Comes With the Fall, such as Smoke and Mirrors and The 3 Wishes, compositions that DuVall believed would stand up to being stripped back. This was the impetus to get the songs on tape.

Others came together for this release, such as The Veil of All My Fears, which was written in a hotel room in Atlanta, Georgia, and recorded the next day at DuVall’s former Madfly bandmate Jeff Blount’s house, on a New Year’s Eve, 2017.

“We brought out some drinks and set up some mics,” laughs DuVall. “That was our New Year’s Eve.”

They all reveal something about DuVall as a guitarist and songwriter, but is it new for him? Yes and no. He learned on the acoustic, an old run-down nylon string he found in his grandmother’s basement.

The idea of writing just minutes before recording is nothing new, either. He did that with Comes With the Fall, when he presented White Hot to the band just five minutes before they recorded it.

“I played to them in the studio, just me and the guitar, singing it into the live mic that we had set up,” he says. “It probably sounded a little bit like what you hear on the One Alone album.”

If One Alone is about returning to the fundamentals of DuVall’s craft, catching him in a moment of unplugged reflection, rest assured: long before DuVall’s car returns him to Manhattan, the conversation turns to the cleansing power of volume, and why his search for the freedom to explore the creative potential of feedback and electric guitar noise in an era of strict noise management is ongoing.

With One Alone all acoustic, did it rethink how you approached songwriting?

"There is not really a lot of thought put into it, especially when I am doing my own music. It is very, very unconscious and instinctive, and I think if I did put any kind of conscious thought or tried to apply some agenda to it would really tip the whole thing over into something terrible that I am not interested in doing.

"This whole thing, for me, it has always been a deeply personal need to do this. It’s mostly about getting out of my own way, just letting the idea be."

Writing and playing on an acoustic guitar is kind of like having an MRI. We hear everything; there is nowhere to hide.

"It has always been an important ingredient, and players who could get it across on acoustic, I’ve always had tremendous admiration for them."

"I borrowed that guitar from Jimmy Demer, who was the drummer in Neon Christ, my teenage hardcore band. He and I have remained close all these years. Every time I would go over to his house for dinner or something like that, or we’d have a gathering of friends go there, it would always devolve into a play-a-long, sing-a-long thing! [Laughs] The guitars would come off the wall and here we are, strumming, playing tunes, whatever comes to mind.

"I would always end up with that one. I just love it. It has a special voice - a very, very rich voice. It turned out to be the perfect guitar for this record. But now that I am going on tour I need to go out and get my own guitar!"

And you went for a Hummingbird?

"I got another Gibson Hummingbird from Gibson. They very kindly gave me this guitar that I became attached to at the last NAMM show, so that’s what I will be taking on the road. It’s a great guitar."

What is the pickup on your Hummingbird?

“It’s just an L.R. Baggs, an L.R. Baggs soundhole pickup. It’s cool, y’know. I just liked the look of it, and once we got it wired up I liked the sound of it. I didn’t really want to put a pickup under the bridge or any of that kind of thing."

Pete Townshend recently said that guitar-based rock music was on the decline, that the possibilities had been exhausted. Do you agree?

"Oh no, I would never say that. No. Because every time that has been said or that’s somehow become the conventional thinking, something always comes up to upend that thinking. They’ve been saying rock ’n’ roll is dead or dying since 1955, y’know what I mean?

"I know that, perhaps right now in the popular culture, in terms of music charts and streaming numbers, and all that stuff, maybe guitar music does not occupy the same place of prominence that it once had when I was coming up. But no. Dying? Dead? Absolutely not."

The guitar’s possibilities still seem limitless. It is as accessible and immediate now as it ever was...

"You can take it on the stage and play everywhere from stadiums to your bedroom with that same setup. You and a guitar. And there is never going to be anything that takes the place of plugging that guitar into an amplifier, and turning it all the way up, and hitting an E chord, and feeling that kind of power going through you. Never.

"I understand, perhaps, what Townshend is saying. Compared to when he was coming up, I mean, he was coming up as part of the generation that put the electric guitar really on the map in a new and artful way and it was the art of destruction, and being the catalyst for the invention of a Marshall stack, and using that as a weapon.

"In such a digitally atomized society, it feels like the guitar, with its analog connection to the craft of making music, is something physical and primal, and important. It’s a tactile sensation of the hand and the strings, of hitting something, of plucking something. And then hearing it back.

"Guitars go back thousands and thousands of years. I mean, string instruments could go all the way back to Africa and people stretching vines across things and hitting them and hearing the resonance. A string vibration is such a powerful thing because are all vibrations.

"All of us, all of ourselves are vibrating at certain frequencies, so, again, I just don’t think that you are ever going to completely do away with that. I think it is a primal human need. I believe that. And there is no electronic bleeps and blaps or whatever that’s going to completely replace that. You can’t."

Besides, it could be argued that we are living in a golden age of guitar, certainly in terms of gear - especially effects pedals. Have you been experimenting much with them?

"Yeah, we get sent things. We try them out in the studio and sometimes you get new versions of old ideas that are just like, ‘Oh, that’s great.’ I remember the MXR Carbon Copy being one of those moments, like, ‘Wow! This is really cool.’ And actually it was a very credible Echoplex-y feeling without having to drag about an Echoplex, y’know.

"But for me I am not as much of a pedal guy as some other players I know and admire. I just don’t tend to have the time or the patience to go through all that stuff.

There is enough to be getting on with right there, learning to play the amp as well as your guitar...

"Look at Hendrix: he used to play the noise, man. That was one of the things that most fascinated me about him as a small kid when I first heard him.

"I understood instinctively that what he was doing was unbelievably cool and kind of like a form of sorcery, because he used to take all these energy waves, these sonic waves, and he was able to manipulate that stuff, and I have not heard anybody do it better since - and that was 50 years ago. So, to me, you really are playing the amp as much as the guitar if you are doing it right. I totally believe that."

Volume is the lifeblood of rock ’n’ roll so you’ve got to be comfortable with it. With today’s venues restricting stage volume, it’s tough to get enough of it.

"That is a thing that I think about a lot when I think about my own live sound. Overall, live sound has made tremendous leaps from the late-‘60s, but I do believe that we have lost some of that experience, that communication between the player and their gear, their setup.

"Hendrix would be standing in front of a wall of amps, and he would turn and engage with the gear, smash a guitar against it or whatever, or go over and turn it up. You’d see Townshend doing the same things. Suddenly, he’d just get a hankering to go over there and turn it up! Continuity be damned! ‘I’m about to take it to e-le-ven!’ And he’d just go over and do it!"

Nowadays, the marijuana is legal and the volume is illegal...

"The experience of the audience has obviously made quantum leaps in terms of live sound, and that’s the whole point. They are paying to see the show. But, yeah, that freedom. And also, you listen to the old recordings - Hendrix’s live recordings or whatever - for the player, freedom is happening with the wall of sound. You hear it in the recordings.

"Hendrix would never be able to achieve a lot of those similar sonic effects with the way things are now. Maybe not impossible, but a lot more difficult to achieve because he really is interacting with the wall of sound, and it becomes a living entity in itself. There is this monster there and he is taming that monster, bending it to his will, and you hear the freedom in the playing. You hear the accidents that are happening. You hear stuff breaking. You hear speakers going out."

And you want some of that freedom?

"I am trying to figure out a way to design a system where I could achieve as much of that as possible without the drawbacks, without having the sound engineer walk off the job.

"What would that system look like? There are some things you can do with monitors, having actual, proper guitar speakers built into proper guitar enclosures and using those as monitors that come back at you so you are not killing the sound engineer, you’re not killing the audience, but you get some of that interaction between you and the speakers and the sound waves. That’s an idea.