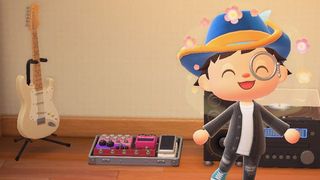 In a time where millions of us are unable to leave our homes, the timing of Nintendo Switch escapism masterpiece Animal Crossing: New Horizons is suspiciously perfect.

One of the way the life sim makes the experience individual to each player is the ability to customize your house with the thousands of items you find around the deserted island you call your home - which, as it turns out, include not only an electric guitar, but a pedalboard, as well.

The ‘Pedal board’, as it’s known in-game, boasts five pedals, which vary in color and appear to roughly approximate a Dunlop Cry Baby Mini, Boss MS-3 Multi-Effects/Switcher, Boss DM-2/BD-2/Tube Screamer, a mini pedal of some description, and a Strymon/Eventide-style digital processor. There’s even a patch bay on the top right, lending the game serious attention to detail.

Suffice to say, Animal Crossing-loving guitarists have been going absolutely bonkers with glee at the inclusion (especially those who already possess the Orange-style practice amp):

got the pedal board. my guitar rig is complete. #AnimalCrossing #ACNH #NintendoSwitch pic.twitter.com/2T9X38AViyMarch 29, 2020

Freakin' pedal board!! I actually play guitar irl so this is amazing lmao (thank u @LucyferOfficial ♥) #AnimalCrossing #ACNH #NintendoSwitch pic.twitter.com/ENqp5CUNkvMarch 26, 2020

I got the pedal board nd it has a earthquaker rainbow machine - my dream pedal :') #earthquaker #AnimalCrossing #ACNH #NintendoSwitch pic.twitter.com/gzvKpb89g6March 25, 2020

pedal board is an item lol #AnimalCrossing #ACNH #NintendoSwitch pic.twitter.com/t2DjjJ3lAzMarch 27, 2020

I got a pedal board from a balloon to go with my guitar! Plus the bag of weed: I'm a real musician!!! #AnimalCrossing #ACNH #NintendoSwitch pic.twitter.com/3jgLVzmG4mMarch 26, 2020

My bf is a musician/music producer so I've made him a house in Animal Crossing and filled it with guitars, amps, a drumkit, mic, effects rack and pedal board 😎 I also have a swanky blue two toned bass to add!! Also @counterparts905 @Northlane @Architectsuk album covers!! pic.twitter.com/nBAJejbdRMMarch 28, 2020

Sadly, you can’t interact much with the ’board itself (after all, you can obtain it whether or not you own a guitar), but we’re hoping Nintendo might add that functionality in a future update.

The ability to get hold of guitars dates back to Animal Crossing’s earlier iterations, which offered a number of variations, from a Strat-a-like ‘Rock guitar’ seen above to a Flying V-type ‘Metal guitar’ and Martin-esque ‘Folk guitar’.

In addition, K.K. Slider, one of the series’ most iconic characters, is an acoustic-wielding dog who performs to the townspeople, and even records albums for you to purchase in-game.

All of which leads us to believe that someone on the Animal Crossing development team is really into guitar. Surely it’s only a matter of time before we start seeing virtual gigs in a town near you...