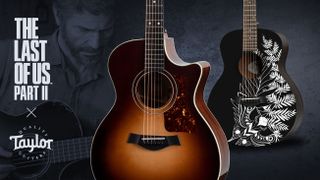 The Last of Us Part II, the long-awaited follow up to the insanely popular 2013 PlayStation game, was released today, and included in the new line of merch alongside the standard t-shirts and coffee mugs are two genuine Taylor acoustic guitars – a special edition 314ce and a GS Mini.

Both models were designed in conjunction with game developer Naughty Dog.

The Taylor 314ce Grand Auditorium is a direct replica of the guitar used by the main character, Ellie, in the actual game.

The guitar boasts a Sitka spruce tobacco sunburst top and solid sapele back and sides, along with a Taylor neck, West African ebony fretboard, nickel tuners and a faux tortoiseshell pickguard.

The scaled-down GS Mini, meanwhile, features a solid mahogany top and layered sapele back and sides, as well as a black finish and transparent black stain for the back, sides and neck.

There’s also plenty of game-associated design, including a replica of Ellie’s tattoo and “custom imagery that echoes the culmination of Ellie’s journey” on the guitar’s top, as well as a custom peghead decal and interior label.

As it turns out, The Last of Us Part 2 in-game guitars can actually be used to play music. You can hear a few renditions of real-world tunes below.

As it turns out, The Last of Us Part 2 in-game guitars can actually be used to play music. You can hear a few renditions of real-world tunes below.

Both Taylor guitars are currently available for pre-order, with shipping beginning on August 28.

The 314ce comes in a deluxe brown hardshell case for $2,299, while the GS Mini comes in a hardshell gig bag with backstraps for $699.

For more information, head to Taylor.

That's our second story on Sony consoles this week, after we reported on a guitarist recreating the opening music to every PlayStation console with air compressors, cello bows and more.