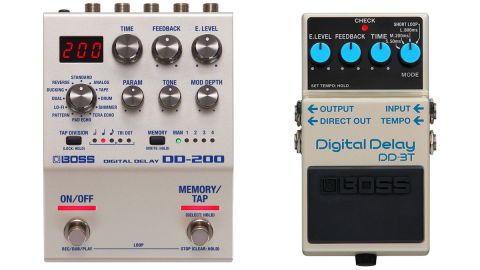 Whether you prefer “plug and play” simplicity or a sophisticated delay unit with a vast selection of effects, the DD-3T and DD-200 offer affordable satisfaction with pro-quality sound.

In late 1983, Boss introduced the very first digital delay pedal, the DD-2. What was truly impressive about the DD-2 is that it featured the exact same IC as the one found in Roland’s flagship (at the time) SDE-3000 digital delay studio rack unit, which means it delivered the same stellar sound quality.

In fact, the DD-3 (which is identical to the DD-2, and the name was only changed after a drastic price reduction in 1986) sounds so good that it remains a favorite with pro and gigging guitarists to this day.

Since then, Boss has introduced more than 15 additional new delay pedal models to provide musicians with expanded delay times and features and to compete with the ever-growing amount of new delay devices from competitors, including its current flagship digital delay stomp box, the DD-500, which made its debut in 2015.

The most recent additions to the esteemed Boss digital delay lineup cover opposite ends of the spectrum. The new DD-3T adds a few additional functions to the classic DD-3 while retaining its simple “plug and play” operation and treasured sound quality. For modern players who want it all, the new DD-200 offers sounds and features inherited from the flagship DD-500 in a smaller, more pedalboard-friendly package.

Although Boss hasn’t explicitly stated what the “T” in DD-3T stands for, my best guess is that it means “Tap Tempo” as this is one of the major new functions the DD-3T adds to the DD-3.

The controls and specs are the same as those of the DD-3, with top panel knobs for effect level, feedback and delay time plus a rotary switch for selecting maximum delay times of 50ms, 200ms and 800ms plus a Short Loop function.

The aforementioned new tap tempo function can be engaged from the pedal’s on/ off switch by holding it down momentarily or an optional footswitch can be connected to the Tempo jack on the right below the ¼-inch input.

The Direct Output jack (useful for wet/dry setups) now resides on the left underneath the ¼-inch output: a welcome improvement over its predecessor’s configuration, we think.

The Boss DD-200 is just a little more than half as wide as the DD-500, conserving space by replacing the latter’s graphic LCD with a three-character LED and removing one of the dedicated footswitches by consolidating the functions of the DD-500’s A and B footswitches to the DD-200’s On/Off footswitch.

A pair of mini switches allow users to select Tap Division settings (half-, quarter- and eighth-note, triplet and dotted) and access either manual mode or 127 user-programmable memory locations.

Finally, the rear panel provides stereo input and output jacks plus a ¼-inch jack for connecting an optional footswitch or expression controller, and the TRS MIDI In and Out jacks, along with a micro USB jack, are located on the left side panel.

The DD-3T provides the exact same beloved sound quality that made the DD-2/DD-3 such a perennial favorite with so many gifted guitarists for the last 37 years or so, and the addition of a tap tempo function (with three selectable subdivisions) makes it even easier to use when playing live.

With this new feature plus the more logical configuration of the output and direct out jacks on the same side, the DD-3T is a worthy replacement for the DD-3 that will keep its legacy going strong for decades to come.

The DD-200 offers a wide range of sophisticated delay effects that will surely fully satisfy the most discerning delay junkie with its pro sound quality, comprehensive variety of effects and sophisticated looper, boasting up to 60 seconds of recording time.

In addition to providing a smaller footprint, it’s also much easier to adjust and tweak on stage. For guitarists seeking a delay pedal for all occasions or applications, it’s the full meal deal.