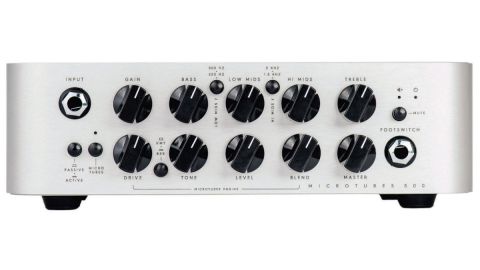 A respectable new contender on the amp/speaker playing field.

If you’re like me, you probably associate Finland-based Darkglass with bass effect pedals, and since the company’s founding in 2009, that’s pretty much been its focus.

I discovered Darkglass products at the winter NAMM show a few years back, and the quality and layout of the pedals continue to impress me. Since then, I’ve a noticed an increasing number of pedalboards that include at least one Darkglass creation.

In 2016, Darkglass ventured into the bass amp and speaker market, and recently I got to spend time with the Microtubes 500 amp head and DC 410C cabinet. Both deliver in terms of providing powerful, meaty bass tones, although a few design elements on the amp could use a bit more scrutiny to make it more user-friendly.

The first thing you’ll notice about the amp head is the dual row of controls on its face, and the variety of tone options each gives you. The top row provides gain adjustment and a 4-band EQ in front of an all-analog, solid-state preamp driven by a class D power module. Besides a MUTE function, the buttons on that level offer the choice of two preset midrange frequencies. Since players prefer different frequencies when it comes adjusting mids, it’s nice to have a couple of choices.

The bottom row provides a separate channel that engages the MICROTUBES ENGINE, which operates in front of the clean channel. In other words, any adjustment to the EQ will affect the tone of the second channel, which offers two separate overdrive circuits (more about that later), along with TONE, LEVEL, BLEND, and MASTER volume.

The DC 410C front-ported cabinet is covered in a sharp-looking gray Tolex, with the company’s supercool logo in the upper right-hand corner (incidentally, any logo made out of all bass clefs is super cool). People who saw the combo remarked at how nice the cabinet looked. An optional footswitch allows you to engage/disengage the overdrive channel and also mute the unit remotely.

To test this rig, I plugged in two basses from different ends of the spectrum: a passive American Standard Fender Jazz and a fretless active Zon Sonus 4-string. With the amp set flat, the Fender came across a bit too trebly for my taste, but a low-mid boost at 500Hz quickly fixed that.

Engaging the MICROTUBES feature led to interesting overdriven sounds: The VMT circuit delivered a nice, warm tone, while the B3K option offered up seriously aggressive, gritty tones. Basically, the MICROTUBES channel operates like an overdrive pedal, so you’ll have no trouble navigating the variety of tones it offers and sculpting them to your taste.

After playing the Fender through the amp for a bit, I plugged in the fretless Zon and was surprised at how much I enjoyed engaging the VMT circuit with this bass. The Zon’s tone was already warm and growling, but the VMT added more depth and character. I could see this setup serving a wide variety of basses well—whether passive or active basses, fretted or fretless.

The amp and cabinet delivered very well, but I would be remiss if I didn’t mention design issues I experienced with the amp’s controls. First, the label type is quite small and light, making it hard to read. Second, the markings for the second row of controls appear beneath the knobs and thus can be seen only if you tilt the amp up or get down on your knees while you make adjustments.

Several experienced players came by my studio, and each struggled to read the control labels. Additionally, the two rows of knobs are so close that sometimes adjusting a knob on the bottom row caused me to inadvertently adjust the one above it. A slightly larger amp housing might alleviate these problems, since it would provide more real estate for the controls.

Overall, the quality and sound of the amp and cabinet combo are outstanding, and, as such, worthy of any serious player’s consideration. While Dark-glass is a newbie to the amp and speaker world, I have a feeling it will become a well-established member before long.