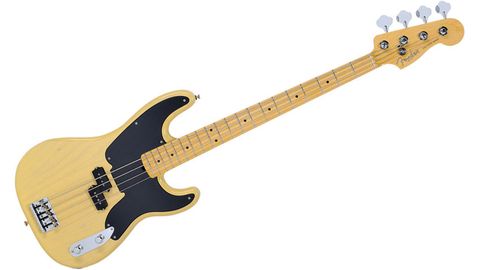 An absolutely classic clutch of tones make this a must-play - if you can track one down.

When the Jazz Bass celebrated its 50th in 2010, Fender threw a party in the form of a limited edition instrument that blended trademark features of the J-Bass through the years: ’60s-style chrome pickup covers, ’70s-style block inlays, and modern hardware.

For its 60th birthday this year, big brother Precision has been treated to a similar trip down memory lane. With a single-ply black pickguard that recalls the P-Bass’s 1951 incarnation, a contoured body and a split-coil pickup that evoke the axe circa ’57, a maple fingerboard that flashes back to 1966, a modern neck profile, and a few new upgrades, the 60th Anniversary Precision Bass is a hybrid that incorporates design elements from across the entire lifespan of the electric bass.

The 60th Anniversary Precision looks and feels like more than a mere re-hash of a bass that was designed 60 years ago— details from its expertly finished ash body to its novel A-string string tree make it clear this concatenated creature is an entirely new beast. The bass arrived intonated and set up to play, so I wasted no time in digging.

I immediately dug the birthday Bass’s neck, which had a slimmer, more modern profile than the vintage and reissue necks. The sound was even across the bass’s entire range, and all notes in the dead-spot danger zone around the fifth fret rang clearly. The fret and hardware installation was top-notch.

To think of the Precision bass as having a single sound is to overlook what might be the basses most crucial component: its tone control. Diming the tone knob and playing the 60th Anniversary Precision with a pick, the bass had a gutsy clang championed by P-Bass pickers like John Entwistle, Matt Freeman, and Mike Dirnt.

Rolling the tone knob back a bit seamlessly enters into tone territory as varied as that occupied by George Porter Jr. and Roger Waters: thick, with a gutsy growl and a somewhat muted midrange. Zeroing out the tone knob allows this particular P-Bass to plumb Jamersonian, Palladinian, and Geezer-esque depths. Of all the Precision Basses I’ve spent time playing— an American Standard, a Road Worn, and a ’62 Reissue chief among them—the Anniversary Precision’s tone control had the widest range and the smoothest taper.

It’s apropos that the 60th Anniversary is also known as the Diamond Anniversary— Fender has designed a gem of a bass. While purists might bristle at the idea of altering Leo Fender’s original design (“He got it right the first time!”), Fender has taken something great and made it even greater. For that, the 60th Anniversary Precision Bass is certainly worthy of a Bass Player Editors’ Award.