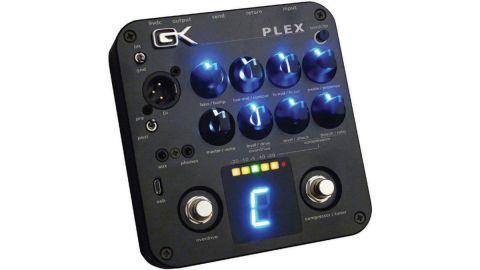 A killer practice and recording accessory.

It’s hard to believe that as recently as ten years ago, it was normal—nay, required—to use cameras, video cameras, voice recorders, calculators, notepads, MP3 players, clocks, flashlights, and maps. Now that a single cell phone can handle everything we once asked of those devices, it seems positively quaint to use something else.

The trend toward increased functionality is obvious in music tech, too. Witness the plethora of portable multi-function bass units—from Tech 21’s SansAmp to the Darkglass Microtubes B7K Ultra—that do double or even triple duty as DIs, preamps with EQ and compression, and overdrive units.

Gallien-Krueger’s Plex preamp, released last year and now updated, ups the ante by packing a DI, preamp, overdrive pedal, tuner, effect send and return, practice/play-along device, and recording interface with updatable firmware into a handsome, portable, rock-solid unit that costs less than some boutique pedals. Is it an indispensable Swiss Army knife, or a jack-of-all-trades and master of none?

My review of the Plex began during last year’s holiday season, when I hustled to learn multiple setlists for several bands on short notice. Loading each band’s material on my phone and connecting it to the Plex’s ⅛" AUX input, I spent lots of time practicing to tracks with an Elrick Gold-series 6 and an F Bass BN5.

The Plex was the right tool at the right time: I dug that although it came with an AC adapter, it worked with my Truetone 1 SPOT; I didn’t have to worry about throwing the tough little unit in a gig-bag pocket or an overcrowded backpack; I liked that each knob glowed a bright white that was easy to see in the dark, and that the red ring around the TRIM/CLIP knob let me know when I got a little too excited. The chromatic tuner, with its large LED display, was decisive and didn’t flinch at my B string. Most important, the EQ controls were straightforward and effective.

I rarely use overdrive, but the Plex’s five levels of dir t, from “warm clipping” to “aggressive drive,” were musical. Although I usually default to the DI on my amps, the Plex’s DI had no extra noise, and it was cool to have ground-lift and pre-/post-EQ options.

The HI MID and TREBLE knobs help shape higher frequencies along with HI CUT and with PRESENCE, which boosts 6dB at 1kHz for more top end. Presets would have been nice, but it was a plus that my settings were saved when I unplugged the unit. (You can bypass all signal processing in the MASTER VOLUME’s “voice” function.)

The EQ helped me dial in the very different tones of the Elrick, strung with new Elrick stainless steels, as well as the F Bass, which has sported the same set of Rotosound Swing Bass 66 nickels for a couple years. Both sounded strong and characteristically GK when I used a TRS-to-XLR cable to amplify the Plex through a powered Gallien-Krueger MBP 112 1x12. And although I saw other players stomp on it, the Plex’s small print and double-duty knobs make it best suited for tabletop use.

I was curious to try the Plex’s 24-bit, 48kHz recording interface. It was a cinch to borrow a Micro-USB B cable from my phone charger and connect the unit to my MacBook Pro—which, incidentally, is the same way I’d update the firmware. Logic Pro X immediately recognized the Plex, which configured the left/right channels as two independent mono channels, one for a pre-preamp signal, the other for use with the compressor, EQ, or overdrive.

Recording through the Plex was a great way to experience the unit’s compression presets and to clearly hear its “voice” options, which are named after Gallien-Krueger’s 800RB, Fusion 550, MB800, and MB150 heads. Some would call the differences subtle; I used the settings as tone templates to tweak and make my own.

An on/off switch, battery power, and position indicators would have been cool, and I liked the overdrive enough to wish I could record clean and effected signals at the same time.

Will the Plex replace my favorite DI, overdrive, preamp, and compression pedals and make me sell my recording interface? Probably not. But this affordable little box excels as the rare bass-specific accessory that’s brilliantly useful at every stage of the music-making process, from personal practice all the way to playing the gig. There’s nothing else like it, especially at this price.