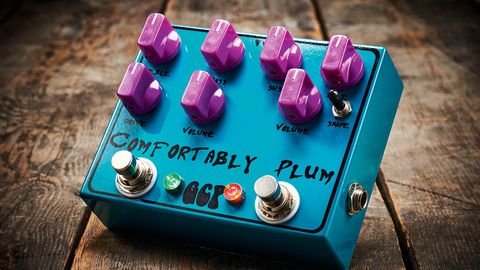 The Comfortably Plum is a profoundly versatile solution for all your dirt, drive and fuzz needs, and a nigh-on pedalboard essential for Gilmour super-fans.

The recent reissue of the Electro-Harmonix ‘Ram’s Head’ Big Muff made that particular early-70s iteration of the much-loved fuzz pedal available from the original manufacturer for the first time in more than 40 years.

And it was no doubt welcomed by David Gilmour fans looking to get close to the classic tones he got when using one. Anyone of that inclination, though, can now get even closer courtesy of Yorkshire’s own Green Carrot Pedals and its beautifully named Comfortably Plum.

It features two classic, independently switched circuits in one pedal. So we have a Ram’s Head Muff-style channel followed by one based on a Colorsound Power Boost, an overdrive pedal designed in the late 60s by Gary Hurst of ToneBender fame and used by David from 1972 onwards, both separately and in combination placed after the Big Muff.

The Muff circuit here sounds typically Ram’s Head-like with the smooth sustain and string clarity that it’s noted for, but for extra tonal versatility there’s a toggle switch supplementing the three knobs to add a midrange boost (4dB or 10dB) to the classic Muff scooped sound.

The original Colorsound Power Boost (rejigged as the Overdriver in the US), one of the earliest overdrive pedals, was essentially a preamp with treble and bass tone shaping and a high output used to drive the high-headroom amps of the period.

Here, the circuitry has been supplemented by a Volume knob to tailor the output and you can dial in anything from a clean boost through natural drive that gets all fuzz-like at the extreme of its Drive knob.

It is eminently responsive to picking dynamics and guitar volume, and features a Treble knob that delivers a delicious singing top-end if you want it. Both channels have many uses individually, but the intrigue lies in combining the two.

A noted Gilmour method is to subtly use the Power Boost to enhance the Big Muff ‘s tone for a touch more sustain and increased presence – as good a starting point as any for exploration.

For any Gilmour aficionado this is a brilliant tonal entry point before hitting your modulation and ambience effects. You don’t have to be a card-carrying Floyd freak to enjoy it though as the combination of effects offers a myriad of drive/fuzz/distortion options whatever music you play.

A reissue of not just any Ram’s Head but a reproduction of the ‘Violet’ version – the most common and reputedly best-sounding revision of Ram’s Head-period circuitry as first seen in ’73 models with violet silk-screened graphics.

Fuzz, delay and modulation in one place. The fuzz here is based on an op-amp Muff rather than a Ram’s Head, and you can select between a multi-head tape-delay effect or between a combination of four different modulation sounds.

Named after The Dark Side of the Moon, Italian company Baroni Lab says this 12-volt pedal “takes 70s lead guitar tone to the extreme” and features string definition that keeps “well out of the mud”.