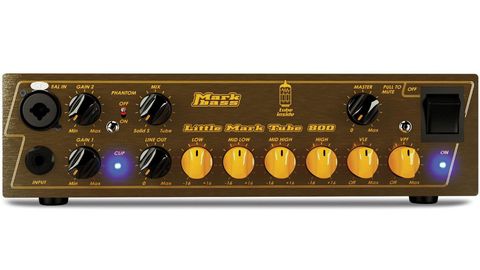 A solid and powerful head with all the gig-ready features you’ll likely want at a value-packed price.

The amp manufacturer Markbass seemed to come out of nowhere about a decade ago, ascending from an Italian upstart remarkable for its ubiquitous use of yellow to a multifaceted major player on big stages and in big-box music stores.

Besides its aggressive R&D, torrent of new models, and relationships with top players, Markbass earned its success the right way, designing a broad range of heads and cabs that made good use of the latest in weight-saving technology, coupled with a commitment to utility in a wide range of musical settings.

The Little Mark Tube 800 reviewed here is a fusion of several preamp design elements found across the Markbass line, all coupled to its most powerful Class D amp to date.

The Little Mark Tube 800 will be familiar to those with Markbass experience. It combines a simple 4-band EQ with Markbass’ standard vle (Vintage Loudspeaker Emulation) and vpf (Variable Pre-shape Filter) controls. In rough terms, the vle control is comparable to a tone knob for the amp—rolling it off broadly attenuates high-frequency response—and the vpf is like the mid-scooping enhance knob on old SWR amps.

Where the Tube 800 differs from other amps in the Markbass line is its twin-topology input stage. A mix knob governs a continuously variable blend between a tube and solid-state circuit, and while I’m pretty certain the single 6205 sharp-cutoff pentode in the Markbass is no replacement electronically or sonically for a proper all-tube preamp, it does offer a different sound from the solid-state setting, although the difference is so subtle that it’d likely be inaudible at stage volume.

The Tube 800’s construction is solid and up to the same standard set by the company’s other heads. I have a good amount of experience with the brand, and a Markbass amp has never failed on me at a gig. Interior construction is orderly and dense, and the hardware on offer is not luxurious, but it’s rugged and skillfully assembled.

One cool feature: The Markbass has two inputs, each with an associated gain control. While the amp does not have a two-channel preamp, it does allow a player to plug into each input and use them simultaneously. One of the inputs is a Neutrik Combo jack with switchable phantom power—perfect for a condenser mic or some upright pickups.

One feature I did not dig: the pull to mute function, where the master volume knob doubles as the mute switch. Not a good idea, given the volume setting is something one wouldn’t want to inadvertently alter in an attempt to go silent.

I’ve spent many hours with Markbass heads on gigs and in the office, so I’m conversant in their fundamental voicing: generally they have a low-midrange focus, a burnished and subdued high-frequency response, and a buoyant, if slightly dry low end. Imagine my surprise, then, when I discovered that the Little Mark Tube 800 has a slightly different personality—a conclusion I confirmed when I A/B’d it with other Markbass heads.

Rather than offering the syrupy mid-forward tone I expected, the Tube 800 seemed much flatter and more focused, with perhaps a touch of a bump in the high-mids contributing to its somewhat more aggressive and strident sound.

The tube/solid-state switching doesn’t do much for me, although I slightly preferred the head’s low-end response in the tube mode, especially at high volumes. Speaking of high volumes, the Tube 800 can deliver, especially when paired with a 4Ω cabinet.

The simple Markbass EQ is well voiced, and I’m as big a fan of the vle as I am of tone knobs on basses. It’s a quick way to diminish distracting clack and bring low frequencies into focus. Given I’m not much for smiley-face EQ, I mostly stayed away from the vpf control, but it’s there should you need insta-slap or aggro metal tone.

In fine Markbass tradition, the Little Mark Tube 800 proved itself a value-packed, versatile, and portable companion that did everything well. Check it out—less for the negligible tube preamp, and more because it’s voiced slightly outside the Markbass midrangey norm. Regardless, for the price, it’s deserving of a close look for a do-it-all, gig-bag-portable head.