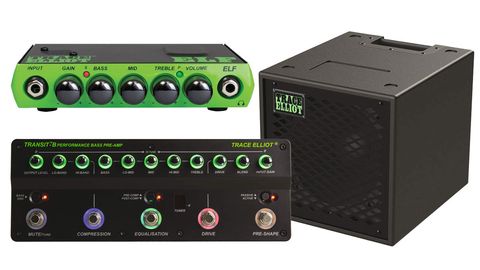 Get most of the benefits, none of the backache with these smart bass amp solutions.

If you’re a working bass player of a certain age, you will remember when humping a 4x10 to gigs—perhaps a 110-pound Ampeg, a 98-pound Eden, or an 88-pound SWR—was a workout you took for granted.

Thankfully, bass amplification has gotten more portable and efficient in recent years, and small heads with light, neo cabs are de rigueur. With its new Transit line, Trace Elliot—the folks who brought us the 88-pound 1048 4x10 back in the day—takes a bold step into the featherweight future of bass gear.

The centerpiece of the Transit family is the one-and-a-half-pound Elf head, which packs gain, a 3-band EQ, volume, a speaker output, power and signal/clipping LEDs, and a DI output into a 200-watt head that’s only slightly bigger than two Boss tuners side by side.

Everything is well thought-out: The EQ is sensible (lows at 80Hz, mids at 400Hz, and highs at 4.2kHz), the knobs are tough, and the vent ports on the sides and top are snazzy. A ¼" headphone jack is a welcome bonus.

Each of the Elf ’s plywood cabs is equipped with recessed handles, steel grilles, and a built-in cradle for the Elf, and they’re both covered in a tough painted coating used in pickup-truck bedliners. The 27-pound 2x8 stands 21 inches tall; the 16-pound 1x10 is only a foot tall and a foot wide.

To sample the goods, we plugged in our test basses, which included fretted and fretless early-’90s F Bass BN5 5-strings, a ’61 Fender Precision with 15-year-old flats, and Bobby’s main ’61 Fender Jazz “Shark Bass.”

Hit it and quit it

Although the tone was a long way from the wide-frequency hi-fi rigs Bobby favors, we found the Elf/2x8 duo instantly capable of sounding clean without being glassy, and focused instead of muddy. Dialing in excellent fingerstyle, slap, and pick tone was a breeze, and although the 2x8 balked at upper-register chords, it held its own quite nicely.

When we switched to the 1x10, we found it rounder and somewhat nasal, but adding it to the Elf/2x8 stack gave us the depth necessary for anything louder than living-room gigs or quiet rehearsals. Stacking the cabs or putting them next to each other revealed further subtleties.

The 1x10 was such a distinctive addition that we wished we could switch it on at will. Trace’s engineers were one step ahead of us: Connecting the Transit-B preamp to the Elf stack and engaging its bass enhance subharmonic generator beefed up our tone like an octaver on steroids, and the little cabs—the 1x10 with an Eminence Neo Pro, and the 2x8 with neo woofers by Faital (a leading European maker of OEM car speakers)—roared like champs.

The Transit-B was packed with everything we might have wanted from the barebones Elf head, including a passive/active input and a DI with ground lift and pre- and post-EQ choices.

The preamp’s other offerings include gentle, musical compression; a colorful, easily visible tuner; warm overdrive; an ⅛" aux input for practice; and five outputs (headphone, line level, instrument level, dry, and XLR). These make it an indispensable part of a versatile package.

Trace Elliot’s Transit line is the perfect modular setup for a world in which back muscles matter, stage volume is lower, DI’s are crucial, and in-ear monitors are hip. If you’ve ever dreamed of walking into soundcheck with a gig bag on your back, a cab in each hand, and tone that works for both you and the soundman, this one’s for you.