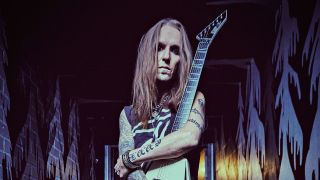 Wow, that’s quite a question. Probably a lot of the older stuff where some of the solos I was writing were insanely fast arpeggios and picking. Everything seems hard right now as I had a massive shoulder operation about two years ago. Apparently, my collar bone had been broken for about 10 years. I’ve had to relearn how to play. It’s not a nerve problem, but some of my fingers are not up to speed on a lot of things. It’s a slow process; I’m still not quite back to where I was before the operation.

After more than 20 years in the biz, what do you think has changed most in you as an artist and as a person?
—Leo Pekas

Well, I’m nearly 40 now and I’ve been doing this for a long time. I managed to quit drinking on the road six years ago. I looked at music on one hand and drink on the other hand — obviously I’m gonna choose music. It was just time. When I’m off the road I’ll still go and get fucked up every now and then. When I’m on the road I’m 100 percent committed. It’s pretty awesome, though, not feeling like you’re going to die every time you wake up. I’m enjoying being on the stage when I’m not hungover.

How would you rate Hexed in the list of albums you’ve released so far?
—Mark Ellmore

It’s too early to say, but the signs are good. We’d already mixed and mastered the album last year, and I was listening to it quite a lot. I took a long break without listening to it at all, and now I’ve been hearing it again during all the promo work that we’re doing. Usually at this stage I pick apart things that I’d like to change, but so far there’s nothing. Ask me in a year!

I believe you once said you felt like you were imitating Yngwie Malmsteen in your early days. You’ve now developed a style that is recognizably your own. How did you break away from imitation and start developing your own style?
—Erik Warren

Well, everyone has influences and I did listen to Yngwie a lot, but I don’t think I ever said or felt I was an Yngwie copycat. There was a whole lot more to my playing than just harmonic minor. There were a lot of neoclassical influences out there, but Yngwie was obviously at the top of that genre. I’ve branched out into every possible style since I was first influenced by Yngwie, and I think that’s the secret — if there is one — to be open to everything. I think it’s fair to say I’ve developed my own style as a solo player and as a rhythm player too.

If you weren’t born in Finland, do you still think you would’ve started a metal band, or is it just a coincidence?
—Carmen Gabriela Lupu

Yeah, I’m sure I would. If I was born in Sweden, say, then definitely. Maybe if I was born in Kazakhstan it might have been different! I’m sure that, as it would still be me, I’d have still been a metal guy, but obviously in some countries the possibilities are more limited than in others.

What would you tell your younger self knowing what you know now?
—Robert Jensen

I wouldn’t tell him anything. I’d just shut the fuck up and listen to him.

What’s been your greatest challenge as an experienced musician?
—Catherine Maguire

100 Guitars from Hell [a live 2015 performance in Helsinki, Finland, featuring Laiho and 100 guitarists] was a huge challenge. I had a lot of help from guitar players all over the world. I wrote the piece they performed; it was about 15 minutes long. It was at the Helsinki festival — it was huge, insane. At the same time, I was finishing the I Worship Chaos album and recording an EP with my covers band. It was pretty fucking hectic.

Would you rather jam with Keanu Reeves or Nicolas Cage?
—Jimmy Judge

Nicolas Cage by far, man! He’s fucking cool. There’s just something about that dude, you know? Keanu’s a great actor, though.

The music industry throughout history has had numerous groups disband or founding members leave. What would you say is the glue that keeps Children of Bodom together?
—Colton McFarland

Touring, touring and touring. We’re a really hard-working band. I know a lot more bands tour more now and have to, to keep making money, and we’re no different. The business is so bad now that a lot of bands have had to undergo major lifestyle changes from the days when there so much more money available from album sales. It’s fucked up now, but we’re lucky we were already used to working a lot. I can imagine for so many acts now it must feel like a lot of pressure to keep working, but what are you gonna do, you know? Who knows what it’s gonna take to get musicians what they deserve. I hope there can be some kind of solution to stop artists getting ripped off.

In most Children of Bodom songs, death is a recurrent theme. What’s your philosophy about life and death — and your everyday philosophy in terms of living and enjoying life?
—William S.

Well, I do enjoy living and life. I’m married, and my wife has a daughter, so I get to experience all those kinds of things. I kind of have two different lives, so that’s one half. But I’m on the road a lot and I spend a lot of the year living by myself in Helsinki; my wife is in Australia so that’s a different kind of existence. That whole dark thing is kind of intriguing to me; it’s a good source of ideas for music. Sometimes I think of lyrics that are not so much about life experience as self-destruction — sort of like more violent fantasies that aren’t things I’m planning on doing, you know? Everyone’s got fucked-up shit in their heads and music’s my way of dealing with it.

How much guitar do you play every day?
—Mattia Headmatt Carli

I do have this “one hour minimum” rule, which makes it sound like a chore, but I do really enjoy to play. As I mentioned, due to my injury, I’m practicing certain techniques to get back to where I was. It takes a lot more time for me to get warmed up. I can’t just pick up a guitar and start shredding now. If I’m on the road, I’ll probably play for about three hours before the show, and if we’re recording 10 hours a day wouldn’t be unusual.

That changes every day at the moment, but I guess right now I’d say the title track.

Do you think heavy metal could possibly become a force in the mainstream again like it was in the Eighties — or should metal stay in the underground?
—Moondy Abel

I always think metal should be bigger and should rule the world. I never really understood when black metal became so big with bands like Dimmu Borgir, etc. A lot of people were pissed about it, but I thought it was fucking awesome. I can remember that feeling, though, when you’re 14 and you want bands to be like your secret, but yeah, I definitely think metal should be bigger.

Outside of music, what are you most proud of?
—Catherine Maguire

I’m not fucking proud of anything! This job in general is very stressful so in my “off time” I like to just cruise around in my car or something. Nothing special there. Outside of music, I don’t do anything that requires any kind of achievement.

Children of Bodom were always influenced by classical music. That’s part of what makes you guys excellent. What are your musical influences on the new album?
—Oscar Sanchez

That’s interesting that you mention classical music and Hexed, as we haven’t done the neo-classical thing since Hatebreeder [1999] or Follow the Reaper [2000], but for a long time that actually was a conscious decision not to have anymore albums in that style. There were so many fucking bands doing the same thing; some were good, but some were horrible, horrible shit bands and I didn’t want to be associated with them. The new album has seen us return to that style. I’m not even sure how or why that happened, but I think it sounds really cool. There’s a lot of what you might call “Eighties style” loud riffing on there, rather than the modern super-, super-heavy kind of riffing, so we kind of went back in time somewhat.

Does your family ever listen to your records?
—Essi

Yeah, my mom and dad do listen to the albums and they’re like 70. They come to the shows and stuff like that — my sister too and my brother-in-law. My wife knows some tunes, but she probably couldn’t name all the Children of Bodom albums, which is awesome as I don’t want to talk about the band with her. Her daughter is 10, so she’s not a metal person but she likes some songs.

How do you divide time between your family in Australia and Children of Bodom?
—Dzanani Medjedovic

I always have and always will put music before everything, so if the band needs me, I’ll be there. My wife understands it; it takes a certain kind of person to understand that their husband or whatever is going to be gone quite a lot. Basically, nothing has changed since I got married. There’s nothing or no one that’s come between me and my music. I try to make the effort to cover both sides, but music is who I am and it’s also how I provide for my family.

If ESP Guitars didn’t exist, what would you play?
—Claire Bannister

Good question. Well, I used to play Jacksons and they’re awesome guitars, so I guess I’d be a Jackson player.

How do you create such intense, aggressive, yet melodic, beautiful and catchy songs and riffs?
—Al

It might not be such mind-blowing fucking advice, but it might help not to confine yourself to the limits of metal. You’ve gotta branch out. Listen to anything and everything and try to absorb it — different elements from different styles of music. Let’s say you’re listening to a pop song from the Eighties or Nineties. I could get a certain idea or inspiration from that song, and then I’d just tweak it and dress it up as metal and there you go. I’m not saying I steal melodies from old pop songs, but you get the idea [laughs]. Try to be open minded and don’t be afraid to try new things.

If you could play guitar for any other band, who would it be?
—Mike Gamache

Goddammit, these are tough questions! If we’re talking any band from history, I’m guessing it would’ve been a lot of fun to play in Pantera.