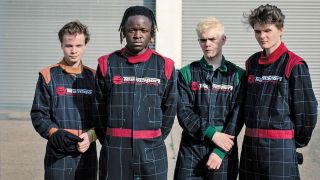 “A new music played by live instruments,” is singer/guitarist Geordie Greep’s succinct description of Black Midi’s ethos. It’s a hugely understated representation of the sound of a band who are unlike anybody else on today’s music scene.

The buzz (and hype) around Black Midi is immense, packed with the kind of attention and plaudits most bands would kill for. But none of this fazes the unassuming Greep. “I’m pleasantly surprised by the attention, but I never let myself get bogged down by it. If you’re starting a band, it’s silly to start worrying about things like that. You should be focused on the music.”

Black Midi formed at the renowned BRIT School in London, the same place that spawned Adele and Amy Winehouse. “It’s free to study [there], but you have to do an audition,” Greep says. “There’s no barrier to getting in beyond that. There’s a lot of opportunity to play with other people. What was great for us was that you get all that free rehearsal time, because it’s really expensive to get rehearsal space in London. We just started jamming for fun; we never had a plan from the start. We had all the facilities, so why not use them?”

Highlights include 953 and bmbmbm (as in boom, not B minor). The whole thing comes off like a horror movie soundtrack mixed with bits of World War III thrown in. “We’ve all been listening to music from a very young age, so the band is a kind of amalgamation of all our influences, direct and indirect. There’s nothing you can pinpoint,” Greep explains.

Schlagenheim was produced by Dan Carey, who’s worked with a host of notable indie acts. “A lot of times with production there’s an obsession with having everything separated and tempos locked down, which is obviously cool but doesn’t necessarily make a better record,” Greeb says. “Dan was really happy to record things, however, we wanted to try any ideas we had. He never said there were restrictions."

Gear-wise, the band take an interesting approach. “I play a Reverend Descent, which is a baritone guitar. When I was a kid, I used to like Spaghetti Western music, and my dad said a lot of the sound was a baritone guitar. When we started to jam and work on ambient kinds of sounds, I thought the baritone would be great to give us a wide sweep of sound. The bass is covering the depths, I’m in the middle and Matt [Kwasniewski-Kelvin] is playing a Tele or a Mustang with a bright sound. It’s almost orchestral.”

Greep asserts that listening to the album is the best way to get into the Black Midi headspace - but that’s only the start when it comes to the live experience. With an almost Grateful Dead-like approach, the band treat the recorded versions of the songs as the starting point for what is largely an improvised set.

“We had a great gig recently in London where we played for two hours; the first hour and 20 minutes was all improvised. The whole improvisation thing can be good or bad. A lot of our songs develop out of jamming. Out of maybe 45 minutes there’ll be about five minutes that sounds like something usable. We’ll take that and make it into a section and keep doing that until we’ve got a song.”

Despite the band members being around 21 years old, they’ve got years of playing under their belts. Greep’s background is surprising: “I’ve played guitar since I was about seven. I played a lot of gospel music in a church band when I was younger. It’s a really good experience. Modern gospel has a lot of R&B and very tight arrangements, and then there are loads of really weird prog elements at times; you’ll get bits like Mahavishnu in there. You’re thinking on your feet and immersing yourself in the whole vibe - great experience for playing in a band like Black Midi, as it turned out!”