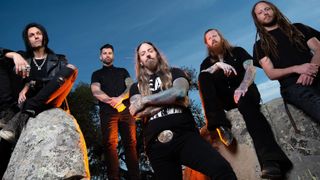 Although they've always proudly charged against the musical grain, DevilDriver have never made a record quite like Outlaws 'Til the End: Vol. 1. It’s the perfect combination of country grit and neck-wrecking metal, a game-changer delivered by true heavy metal outlaws.

With songs like “(Ghost) Riders in the Sky,”  “Whiskey River,” “If Drinking Don’t Kill Me (Her Memory Will)” and  “Country Heroes," Outlaws ‘Til the End might be one of most invigorating records DevilDriver has ever made.

Guitar World recently spoke with Neal Tiemann, the band's guitarist, about the new album and more in this new interview.

What made the band decide to do a country-themed album?

It  actually started with Dez. Like any band, we’ll all be sitting in the  back-lounge listening to music as we’re getting ready for a show. So,  there was always the fair share of Pantera and In Flames, but he’d also  be listening to Johnny Cash, Merle Haggard and Hank Williams Sr. The  rest of us never batted an eye. For me, growing up in Texas, I heard  them a lot. One day, Dez suggested we do a country covers record. We all  laughed at first but then took a step back, and it slowly came to  fruition. But it really all started with that back-lounge hang.

How have fans reacted to the new album?

Surprisingly  well. We weren’t sure how people would take to singing on a DevilDriver  record but everyone we’ve talked to on this run has been taking it in  and loving it.

What was the criteria used in determining which songs to do?

We  tried to pick songs that had some kind of meaning to us. Dez was  adamant about doing the Willie Nelson song, “Whiskey River," and  whenever I hear Dwight Yoakam, it reminds me of fond memories with my  dad. So, “A Thousand Miles From Nowhere” had special meaning. We  listened to a lot of back catalog but also dug deeper to find songs that  had a good melody or could transfer to metal. Then we took it from  there.

How do you approach recreating the song but still giving it the DevilDriver spin?

For  the most part, Mike and I did a majority of the music beds first. Then  we’d take a look at the melody or chorus line from the song. For a song  like “Whiskey River," we weren’t sure about keeping the classic I-IV-V  country progression, so I threw a black metal version of it underneath.  It was all about finding what could go the furthest and still sound  okay.

Let’s discuss a few other tracks from the album, beginning with “(Ghost) Riders in the Sky”

This  was another one that Dez wanted for the album. I remember as we were  doing all of this, Dez started talking to John Carter Cash (Johnny  Cash’s son) about wanting him to be a part of it. We weren’t sure he was  going to be able to do it but sure enough, the next week Dez is flying  out to the Cash cabin to record vocals. It’s a centerpiece of the record  because it’s the closest thing rooted to Johnny Cash, which kind of  started the whole project.

How about the track, “Country Heroes”?

Before  I was in the band, one of the first DevilDriver tours was with  Superjoint Ritual when Hank III was playing bass with them. When we were  choosing songs for this album, “Country Heroes” had to be one of them  because Hank III is our boy.

What do you think makes country music so special?

I  think it’s timelessness comes from its simplicity. Those guys maybe  weren’t the greatest guitar players in the world but they knew how to  turn a phrase. They were able to say something simple to the common man.  There’s something about the songs that’s deep rooted and easy to take  to heart.

We’ve  got a quick run of dates we’re doing now and then we’ll be in Europe in  the middle of August. We’re also working on finalizing a fall tour.

I’m  playing Dunable guitars R2 model. They’re a fast-growing company out of  Glendale, California. I put 8160 EMG’s in them and pair them with  Kempers. I also have some Peaveys for lead tone and that’s about it.

Having completed this album, what gives you the most satisfaction?

I’ve  gotta tell you, the best feeling the album has given me so far is  hearing my dad sitting out in his barn on his Texas ranch with a Jack  and Coke. He said, 'You know, these songs are all right. I do believe  you’ve done one of the best records in your life.' He’s not a metal guy  by any means, so hearing him say that was validation.

What excites you the most about this next phase of your career?

I’m  most excited about being about to do what I do. People have said that  rock and roll is going away. It’s ebb and flow and right now we’re in  the ebb part of it. We’re still working hard and touring and that’s what  makes me excited.