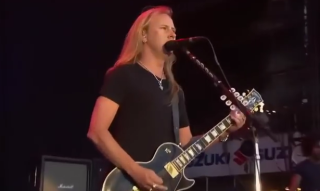 Alice in Chains guitarist Jerry Cantrell has unveiled a new solo track, "Setting Sun." You can give it a listen above.

"Setting Sun" was was recorded in Los Angeles and produced by Grammy Award-winner Mike Elizondo (Eminem, Twenty-One Pilots, The Regrettes) and film composer and former Marilyn Manson guitarist Tyler Bates (Guardians of the Galaxy Vol. 1 & 2, Deadpool). You can download or stream the song right here.

Meanwhile, Cantrell is also keeping quite busy with Alice in Chains, who are currently gearing up for the release of Rainier Fog, their first album in five years.

Look out for more coverage of Cantrell and Alice in Chains from Guitar World in the near future.....