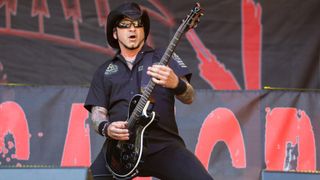 Tom Maxwell is no stranger to pain by injection, as he’s been on the receiving end of tattoo needles countless times.

However, nothing prepared him for the agony of cortisone shots in the palm of his left hand, which were the first line of treatment for stenosing tenosynovitis, an excruciating condition better known as 'trigger finger'.

“I’ve had tattoos all over my body and I’ve had some serious crazy pain happening,” he says, “but this was totally different.”

Stenosing tenosynovitis is caused by inflammation in the tendon sheaths through which tendons slide during movement.

The inflammation, in turn, locks the finger in a bent position. Manually straightening it, which is the only way to return it to a normal position, causes a painful snapping sensation.

While often the result of repetitive gripping motion, for Maxwell, it came on in the aftermath of an accident. “I wore a cast on it, it healed up, and everything was working OK,” he says.

“There was a little bit of lingering pain from the break. One day I made a fist and my middle finger wouldn’t go back up.” His primary physician referred him to an orthopedic surgeon, Dr. Garth Smith, in Annapolis, Maryland. “An amazing dude,” says Maxwell. “Big fan of the band, too, which really freaked me out. Small world!”

The cortisone injections allowed the guitarist to finish recording his parts for Hellyeah’s latest album, Welcome Home, and made it possible for him to fulfill some tour dates.

But the problem returned, and in September, Maxwell underwent surgery. “There’s only so many shots you can do, because cortisone eats away at your tissues,” he says. “The only solution was to have this surgery, and on the day off, my doctor examined my hand again and said, ‘This is definitely going to come back. We have to do this.’

The surgery took about 30 minutes. He made an incision right where the finger meets the palm, right below that line. It was maybe an inch and a half, with three or four stitches.”

When Maxwell spoke to Guitar World, he was preparing for Hellyeah’s November tour while still rehabilitating his hand according to the ideal protocol.

“My doctor told me to play my guitar as much as possible,” he says. “He told me to keep my fingers moving and stretch them forward and back. I also use a squeeze ball to exercise my hand. I do that throughout the day, when I walk around the house and walk my dog. That’s pretty much the process.”

We spoke with Christian [Brady] a few weeks back and talked about your working relationship, so let’s start with your perspective about that.

"Christian is one of my best friends. I love him. When I first met him through Vince, we were just acquaintances. Right as we were a three-piece, we were out one night and we saw Christian playing with Franky Perez.

"You could just read the love affair he had with his guitar. He was feeling everything he was doing. I said to Vinnie, 'That's the guy I want.' He's not one of these dudes who overplays or underplays or goes through the motions. There's an aura around him when he plays.

"It's developed into not just a brotherhood and a friendship; it's like a Zen thing going on between us, an unwritten connection. We read each other really well.

"When I'm recording and stuff, I'm focused on songwriting. I'm not a big advocate for solos. I do them when I feel it, but my solos are like little melodies inside of songs, where his are like awesome Christmas decorations that he brings to the tree. I always refer to songs as trees, and all the branches and decorations are add-ons that make them so beautiful. I lean on Christian for that, and I count on him just following his gut and his heart."

"It’s crazy; we play guitar, we’re in the same band, we have the same birthday - a lot of little things that lined up. The one thing that's really in the forefront for us is the amount of respect we have for each other. It’s a pleasure to work and play with him, and even more so to have him as a friend."

Your gear list is very much no frills. One could even call it a back-to-basics approach. Has that always been your style?

"Yeah, it has. It really comes down to the bare essentials. In the early days, before we had things like Kempers and all the profiling types of amps, I was using an ’80 and an ’81 Marshall 2203 with a noise gate and a Tube Screamer.

"I’ve always had a chorus pedal, I've always had wah-wahs, and I still run cable, even to this day. I'm not a wireless guy. I think the true tone of the guitar is interrupted by that. Other people are, 'Oh, it sounds great,' but I can sense it. I can tell. The reaction time is different, overtones are different, it's just not for me.

"Now, moving forward and having this Kemper system, I've taken all those amps, I’ve profiled them, I've merged them, and I've combined them. I do run direct out of it for the monitors and for front of house and stuff. But I like to have cabinets onstage so I can feel that push. Sometimes my sound guy will put a mic in front of it just to get that extra oomph, but it's still relatively simple.

"Outside of having that profiling amp, which has a ton of effects in it, I always have my trusty chorus. When I'm playing big, open-chorded choruses, I like to have that lush, floating sound, which a chorus will provide.

"And then the old trusty Dunlop wah. It's not complicated at all. It's super-easy to deal with.

"Christian's got a lot more stuff than I do. He’s the gearhead. He wants to get every single tone perfect that was on the record. He wants to mirror it, and I respect that. I applaud him for it. But I'm like, I don't give a shit. I have my full-blown distorted sound.

"Then I'll have another preset that’s cut back almost like an AC/DC kind of a distortion, not quite as sizzly. And then I'll have some clean tones. I don't like to have to think about what I'm getting ready to do when I'm playing.

"I'm so in the moment that hitting a button is enough for me, versus making sure that my foot aim is right to get this pedal. I don't need all that commotion! You know, too much drama! So I leave it up to Christian. It's like, “You do all that stuff, man. I'm going to stay over here and just play.”

"The records are forever. I want people to listen to the records and hear everything, but live, it's a totally different element for me. I don't need to have all the extra trimmings.

"Even if I'm going full-blown and I want to pull back a little bit, it’s as easy as just rolling back my volume knob, like Jimmy Page used to do in Led Zeppelin back in the day. He had some of the most beautiful tones just by rolling back his volume and messing with his tone knobs and still crushing it through his amps. Just rolling it back a little tiny bit changes the whole perception."

You are also a Dean man. Tell us about your guitars.

"They built me two custom hollowbody Colts. They’re thinline hollow bodies, pretty much like the Gibson ES-137. Instead of traditional f-holes, I had them put in pitchforks.

"The neck is ebony and there's a couple of devil horns on the 12th fret. And I got the dots along the sides, which I’m kind of regretting because I’m having a hard time seeing as I get older.

"My vision is getting more cloudy and I’m having to wear readers now. I’ve got my glasses on, I’m playing, and I can see everything, and then, when I get onstage, I'm like, 'Dude, I need to put some Wite-Out on these fuckers!'

"There are two customs. One I call Lucy. She’s black with a gloss pentagram on the bottom. Her brother is Sidney - Sid for short because I'm a big Sex Pistols fan - and he’s a candy-apple almost dried-blood red, beautiful and really bright.

"They’re the same guitars but with different finishes. And they sound different. They both sound great and they're awesome, but it always amazes me how no two guitars sound the same."

Have you changed anything in terms of fretting and technique as a result of the trigger finger and surgery?

"I have a hard time playing baritones because of the longer scale, and I use a baritone when we do A-sharp tuning because it's so low and I need that extra string width to keep the tuning perfect.

"I'm a hard picker and sometimes I’ll pull the key sharp, so I use baritones when I get down that low. I think what was affected more was sliding. On certain parts, like coming out of a verse, for example, and it would slide into a chorus, that's when it would hurt. Even now, I still feel it when I'm doing a slide.

"My hands aren't on a bend or on an angle. That didn't bother me as much. Solos can get a little testy sometimes, if I'm doing bends. So it's mainly when I'm doing bends and slides that I feel the ache. It’s an odd sensation.

"But it's all good. I had a good surgeon and he put my finger back together. It's working. I'm playing. Some of this stuff that we play is very demanding. It’s busy sometimes. So I'm thankful that I’m able to do it, because it could have been the opposite. It could have been, 'Dudes, I’m fucked.'

"I don't know what I would've done if I wouldn't have been able to play anymore or play nearly as good, because 50 percent ain't gonna cut it for me, you know?"