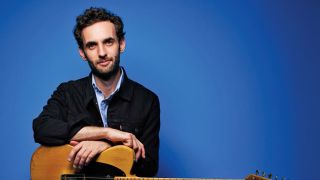 Although he’s just 31, Julian Lage’s career has spanned more than two decades and has seen the virtuosic guitarist perform with artists ranging from Carlos Santana (when he was only 9) to Doc Watson to David Grisman. He’s also recorded with Wilco’s Nels Cline and the Punch Brothers’ Chris Eldridge and released albums in duo, trio, quartet and quintet configurations, as well as in solo acoustic format. And — to round things off — Lage is a current Guitar World columnist.

His newest record, Love Hurts, finds Lage leading a trio rounded out by bassist Jorge Roeder and Bad Plus drummer Dave King, and, characteristic of his ever-curious musical mind, tackling an idiosyncratic collection of songs that, in addition to several originals, includes Roy Orbison’s “Crying,” Keith Jarrett’s “The Windup,” Ornette Coleman’s “Tomorrow Is the Question” and the Boudleaux Bryant title track, made famous by the Everly Brothers and, later, in power-ballad form, by Seventies rockers Nazareth.

As for the connection between this seemingly disparate lineup of tunes? On a basic level, says Lage, “the whole idea was to do songs I love.” But there’s also a deeper link: “These are all pieces that were written by American composers, and typically in the last 50 or 60 years,” he continues. “They’re shorter-form songs and they’re all songs that, to me, pack a certain emotional punch. Some are kind of heartbreaking in a more somber way, like ‘Crying,’ and some are more poignant, but also very uplifting, which is Keith Jarrett’s language. I think of it as ‘heartbreakingly beautiful.’”

Another detail that links the music on Love Hurts is that it all was cut live in the studio, and more or less captured in one or two takes. Lage tracked the album at The Loft, Wilco’s facility in Chicago, and the entire project was recorded and mixed in three days. The point was to “capture the early stages,” he says.

“The thought was, ‘Go somewhere where we don’t bring our own equipment and we just kind of submit to however they make records,” Lage says. “And The Loft isn’t a traditional recording studio. There’s not a lot of isolation, there’s not a separate control room. It’s just kind of an unorthodox space that they figured out how to use really effectively. So we showed up, the guitars and amps were all set up when we walked in and we did the record basically on the first day.”

When it came to those guitars and amps, Lage wound up using gear that belonged to Wilco frontman Jeff Tweedy. “I have a ’54 Tele that I love and that has been my main guitar for a couple of years,” Lage says. “But when we started tracking it seemed like these songs needed something a little darker, a little more visceral. So I ended up playing one of Jeff’s old Gretsches, I believe it was a ’56 Duo Jet, and I ran that through an old Gibson BR-6 amplifier. And the sound was so compressed and so beautiful. It was nice to kind of forego my usual strategies. It was pretty liberating.”

Despite the change in approach on Love Hurts, Lage says there’s a clear line that runs through all his work. “I have a vision that is deliberate, and that is to make records that challenge me,” he says. Furthermore, his music continues to explore and reflect his fascination with the instrumental form in general.

“Instrumental music conveys such emotion, and on such a deep and abstract level,” Lage says. “I think I appreciate that more and more as time goes on. I said to someone the other day, it’s kind of like reductionism — you have these emotional gestures that people don’t have the words for, and if you reduce that to the energy of instrumental music, you can then find all these unorthodox ways of communicating those emotions. To me, that’s such a beautiful thing.”