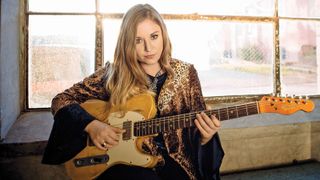 Joanne Shaw Taylor has been ripping it up for years, delivering bluesy, raw soul that cuts straight to the core. But the British electric guitarist truly turned up the juice on her latest release, Reckless Heart, a collection of poignant songs that happens to be packed with wailing guitar goodness.

For the past 10 years, Shaw Taylor has made Detroit her home, and for this album she took advantage of the local scene’s inspiring musical flavors, tapping longtime friend Al Sutton (Greta Van Fleet, Kid Rock) as producer.

Reckless Heart may be Shaw Taylor’s sixth studio album, but it also represents a lot of firsts for her. It’s her first album largely recorded live - and with some of Detroit’s best musicians, including jazz drummer Ron Otis, bassist James Simonson and keyboardists Phil Hale and Chris Codish. It’s also the first to feature an unplugged solo performance, and the first with her new label-home, Silvertone/Sony.

Reckless Heart simmers with fierce guitar riffs, outstanding autobiographical songwriting and vocals that roll out in a satisfying, smoky growl. Her live shows will knock you out with powerhouse, all-in performances built on a backbone of the blues.

“I don’t consider myself an out-and-out blues artist,” says Shaw Taylor. “I don’t think my album is a repetition or expectation of what a blues album generally would sound like.

"I approach music from a blues musician point of view. I’ve been deep rooted in that styling; there’s a feel to it. That definitely shows in my music. Even if I want to branch out to soul and pop or rock, that kind of feel that I got in the early days, it’s still there.”

Shaw Taylor’s solid, gritty blues tone is the result of a fairly minimalist rig. “I approach it from a very old-school point of view,” she says.

“My main guitar is a 1966 Fender Esquire, and of late I’ve been using Bletchley amplifiers out of Detroit and a Fender Super Reverb. Other than that, I use just one pedal, a Tube Screamer, and that’s about it. I don’t feel the need for loads of pedals. I think that just kind of dilutes the tone. It’s all in your fingers anyway.”

Starting out with classical guitar, she made the switch to electric, cycling into town to buy the one BB King album they had in stock - and then learning every song before moving on.

“I’m glad I did it that way, because I had to really learn one whole album, and I made mistakes doing it because no one was there to correct me. But now those mistakes are a part of my guitar-playing personality.”