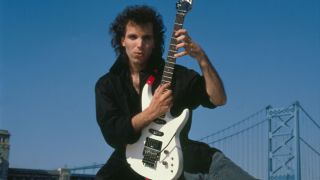 The incredible success of Joe Satriani’s second album, Surfing with the Alien, ushered in a renaissance period for instrumental electric guitar albums during the late-'80s/early '90s, paving the way for similar efforts like Steve Vai’s Passion and Warfare, Eric Johnson’s Ah Via Musicom and Jeff Beck’s Guitar Shop, which also ascended to impressive chart positions.

While Satriani’s innovative new tricks and techniques caught guitarists’ attention, what really made him appeal to the masses and stand out from dozens of other shred guitarists preceding him were his memorable melodies and bold, assertive tone.

Surfing with the Alien still sounds as good today as it did more than 30 years ago, but surprisingly the rig Satriani used to record the album was rather modest, especially for its time.

His main guitars were a Kramer Pacer with two humbuckers, another Kramer Pacer with three single-coil pickups and a self-assembled Strat-style guitar made from a Boogie Bodies maple body and ESP ’59-style maple neck with ebony fretboard, with various pickup assemblies that he would swap as needed.

Joe Satriani reveals the secret to improving your legato technique

For the album’s title track, he used the hardtail Boogie Bodies for the rhythm track while playing the lead parts on the Kramer and making good use of its Floyd Rose.

The song’s aggressive lead tone comes from a combination of a Chandler Tube Driver, Cry Baby wah pedal and the studio’s Eventide H949. The Tube Driver provided distortion, sustain and upper-midrange punch, while the wah was employed to deliver a voice-like midrange honk.

The Eventide H949 is the “secret” weapon here, dialed in to a slightly detuned setting that further thickened the tone and added a distinctive, abrasive texture.

TONE TIP: Use the Pitch Fork’s “detune” setting (D) and the Mode switch’s “pitch down” setting to mimic the warbling, chorus-like effect.