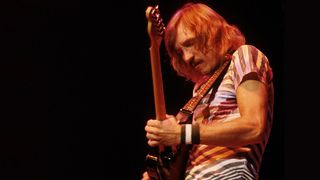 Joe Walsh’s contributions to rock electric guitar tone are immense. With the bands James Gang, Barnstorm and the Eagles - and as a solo artist - he has recorded dozens of influential solos and riffs that continue to inspire guitarists today.

He also introduced the talkbox to the rock guitar vernacular and made highly innovative use of effects like the Echoplex and Leslie rotating speaker.

As a noted gear hound, Walsh has recorded a multitude of awesome guitar tones, from his solos on the Eagles’ Hotel California to the seminal talkbox hit Rocky Mountain Way.

One of the coolest tones Walsh ever recorded is also one of his simplest: Funk #49. Internet 'experts' often claim that Walsh used only a Fender Tele and tweed Fender Champ to record the song, but Walsh corrected this - in his May 2012 Guitar World interview - by noting it was actually a blackface (circa 1964-’67) Champ.

40 years earlier, in a 1972 Guitar Player interview, Walsh said he used a 'Vibroplex', but this was probably an inside joke as Walsh is a ham radio enthusiast and a Vibroplex is actually a Morse code key. Perhaps it was actually a 1964-’67 Vibro Champ, which is identical to the Champ with the exception of its added tremolo circuit.

Details about the exact year of Walsh’s Tele are unknown, although in the 1972 interview he said it was “old” and he had modified the pickup wiring to provide “modern” bridge/both/neck settings. Teles featured either a 'blend' circuit until 1952 or a neck bass/neck with tone control/bridge without tone control circuit from 1953 until 1967, so the Tele was most likely from 1959 or earlier as Walsh prefers Teles with maple necks - and he referred to it as “old.”

Walsh’s Tele tone on Funk #49 sounds particularly raunchy and percussive due to the guitar’s lowered action and Walsh’s use of a light-gauge nylon pick. Having compared the sounds of a tweed and blackface Champ when playing the song, I can attest that it’s definitely a blackface, as the tweed’s midrange is too prominent and the bass is too loose, while the blackface has the perfect treble sparkle and low-end spank.

TONE TIP: The Pro Junior IV is bigger and louder than a blackface Champ, so don’t overdo the controls. Volume at 8 and Tone at 5 (using the front panel’s 1-12 designations) works best.