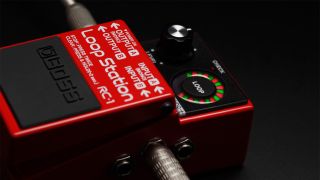 These are the best looper pedals available today

Most people first buy a looper pedal because they're the only guitarist in a band and need to double up a part, or play a lead over some chords. Once that's out of the way though, you're left with a potentially quite large chunk of your pedalboard real estate spoken for, so what else can be done with it?

Well, there's a lot more to the humble guitar looper than just playing back longer chunks of audio. Most of the more interesting things you can do with one spring from the idea that, like a digital delay, it's just recording a buffer and then replaying it, except that, unlike with a delay, you have fine-grained control over not only when, but often how, the buffer is replayed.

We’ve recorded some examples to show you a few ideas to try yourself. Our signal chain for each example is:

It's worth noting that the simple act of moving the looper forward in the chain also opens up new possibilities, as you'll see and hear in the examples below.

There are probably lots of tricks we haven't thought of, such is the creative power of a loop pedal, but here's a few of our favorites.

Stutter is a simple effect that's used very frequently in math-rock, and occasionally in tech metal.

Doing it is super simple – just capture a tiny fragment of audio, usually from the end of a phrase, and let it play. Traditionally, this was achieved with delay pedals like the Boss DD series that feature a very short looper.

In this clip, we're using a Boss DD-6 set to the hold mode to capture part of the final note of a phrase. You'll hear how deliberately catching different lengths causes a radically different effect, with smaller captures having a 'machine gun' like quality.

Within a riff, capture a tiny chunk of articulation – a pick slide, a transition between two notes, a bend – and retrigger it either immediately, or later between other notes to either emphasise the end of a phrase or to 'gel' them together with the noise.

For this trick, we've usually found loopers that don't allow more than one loop, or dedicated micro phrase loopers that only capture a tiny buffer work best. It's a niche trick but can sound cool in certain genres of music.

In this clip, we capture the high note in a riff for emphasis, using the DD-6. We deliberately only catch part of it, or the slide up to it, to create a glitchy effect. Some pedals can go fully wet, muting the dry signal, and this can sometimes work better.

Many loopers have a half-time setting, and this can be used to create pad chords for ambient sections or segues. Live, even if a background pad is out of time with the band, it's likely to not be noticed by the audience as long as it's not too loud in the mix.

A good way to make this smooth is to use a volume pedal or the guitar's volume knob to swell the chords in a chord progression in and out while you're recording the loop, then there won't be any dramatic, attention-grabbing pick attacks.

Once you've got your loop, if the looper has a variable speed knob, turn it to the minimum speed, or if it's got a dedicated half-time setting, engage that. You should be able to then play your riff over the top normally.

In this clip, we first start out with some simple chords. Then we toggle them into reverse mode on our Ditto X2, and then toggle into half-speed mode. The DD-6 delay and Strymon El Cap complete the pad effect, when combined with a large hall reverb in our DAW.

This will only work with loopers that have a dedicated effects trigger – but many mid-range and above loopers will even support doing this on-the-fly. Play your solo, and then as you finish, trigger the reverse and play modes on the looper using both your feet.

If the looper doesn't support this, then as long as it allows for reverse playback, play in the loop during soundcheck, and then trigger it in the reverse playback mode later.

This also has the benefit of allowing you to trigger the loop without being seen to play it in first, but it does make the looper something of a one-trick pony.

For one song, we have a trick where the intro riff is played back later in the song backwards, so the intro serves as an opportunity to capture the riff for later use.

In the clip, we play a melody line into the Ditto X2, then reverse it. In the second half, we demonstrate that you can also stop the – now reversed – loop, then immediately trigger it, as most loopers will also allow this function.

More of a trick for segues and intros, but if you know in advance that there's a chord that will lead in well to a song or section, then it can be fun to construct a chord out of drones.

Start with a single note – probably the root note of the chord – then add in additional harmonies until your chord is complete.

The trick with this technique is to set the mix volume at just below unity, and start playing the drone note before you hit play on the looper for both the initial loop and every additional stacked loop, or you'll end up with silence or gaps instead of a smooth, consistent chord.

You can also volume swell in each note, which gives a clean, legato feel once you've got more than a couple captured and playing back.

In the clip, you'll hear a short, somewhat rudimentary example of this technique, where we're just volume swelling in harmonies with the guitar tone rolled all the way off. They're captured by the Ditto X2, then played out through the DD-6 and El Capistan.

Although most people put their looper at the end of the signal chain, we've also had a fair bit of success putting it in the middle and then adding a delay, distortion or wah afterward, as we have in the chains above.

By adding a wah, you can play a loop, then add filtering – other modulation will also work well for this. By adding distortion you can make a loop instantly lo-fi. By adding a slapback digital delay with the mix on full, you can add machine-gun bursts of glitching.

Depending on how involved your manipulations are, you may not have your hands free to continue playing – if you do want the guitar to sound as well, you'll need an A/B box in front of the looper to redirect the signal, and a mixer after all your pedals, but before the amp.

Not only that, but a number of loopers, such as the Ditto X2 at the lower end, and most high-end units, allow you to manipulate your loop once recorded, applying effects, slowing down or even reversing the loop.

This one is pretty self-explanatory. You're already routing your guitar through the looper, sure, but a lot of more expensive loopers support stereo operation, and keep the stereo paths separate. This means that in practice, as long as you are happy with the looper capturing the audio from all inputs, you might already be able to plug say, keys or a mic into your looper.

Of course, the pro-level loopers just have separate inputs and separate loops for different instruments, but especially if you're mainly using it to stack loops, this could be an interesting trick to try.

Another way of going about this is to put a line switcher in front of your pedal chain and simply route either your guitar or your keyboard through all your pedals – so long as you don't mind it coming out of your amp.