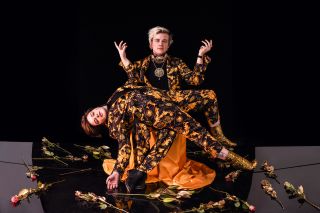 THEY ARE two fierce and fiery disco-punk debonairs from Wollongong (though now based further south) with their sights set on the stratosphere and their songs set on making you move. Up front, Heather Riley oscillates between sugar-sweet singing and a gut-punching yell, twisting and twirling around onstage like their body was made of rubber. And with axe in hand, shredhead Jonno Tooke is a force you wouldn’t dare think of f***ing with, his overdriven juts as powerful as the synths they meddle with are bouncy.

THEY SOUND LIKE a genre‑neutral chasm of crunchy guitars and soul‑thumping electro leads, merging punkish attitudes and heart-on-sleeve fury with dizzying disco vibes and inescapable danciness. They rock a sharp and unapologetically gaudy, Bowie-esque theatricality that makes them stand out like a grizzled wolf in a room full of poodles.

YOU'LL DIG THEM IF YOU LIKE the Yeah Yeah Yeahs, Panic! At The Disco, and coming home to an ice-cold raspberry Cruiser on Friday afternoon (before heading to the club for another 35).

YOU SHOULD CHECK OUT the airwave-dominating “Robert Smith” – an equally fun and furious (and a tad cheeky) ode to the titular Cure legend, and a well-earned middle finger to Morrissey. Note the 9/8 time signature that pops in for the driving riff, which absolutely shouldn’t work in a four‑to‑the-floor pop banger like this, but they nail with punishing piquancy.

THEY ARE a trio of heartstring-tugging emo dorks from Sydney busting out some of the genre’s best new sounds (albeit all too infrequently). The focal point is the deft, razor-sharp interplay between vocalist Kieran Baskerville and guitarist Julie Enriquez, the former’s battered drawl a welcome contrast to the latter’s equally chaotic and charismatic fingerpicking.

THEY SOUND LIKE the perfect soundtrack for that part of the road trip where surroundings are barren and introspection looms. Songs ebb and flow between chill noodlers and all-energy head-thrashers (oftentimes repeatedly in the same cut), bringing to the current emo revival a bright and buoyant flavour all of their own.

YOU'LL DIG THEM IF YOU LIKE Modern Baseball, American Football, Modest Mouse, and gazing ominously out of train windows and pretending you’re the underdog protagonist of an indie ballad music video.

YOU SHOULD CHECK OUT their luminescent 2019 EP, Why Are All My Plants Dead? Its 13-minute runtime is depressingly minuscule, but layered deep with polychromatic guitar hooks and earwormish vocal melodies, there’s more replay value on deck than some hour-plus epics. We could listen to Enriquez’s neck-noodling fluidity for hours on repeat.

THEY ARE a brand new alt-rock outfit hailing from Newcastle, who made quite the mark on their local scene with the release of debut single “Suffer” in March 2018. Further kicking up a storm with their debut EP, Everyone You Left Behind, Sleepeaser are already on their way to a major mainstream breakthrough, having caught the eye of high-profile acts the likes of Moose Blood and Hundredth.

THEY SOUND LIKE the fuzzed-out love child of Taking Back Sunday and the Foo Fighters. Sleepeaser teeter on the edge of late-‘90s transition grunge and turn-of-the-century punk-rock, before falling right in an explosion of indubitably Australian character. That quality harbours a particular melancholy in the vocals, offering metaphorically charged narratives while retaining a true grit in the guitar.

YOU'LL DIG THEM IF YOU LIKE early Foos and Taking Back Sunday, naturally. The hybrid is unusual, yes, but the ingenuity of some of their songs makes them very much standalone, and very much Sleepeaser.

YOU SHOULD CHECK OUT “Little Victories”, which utilises intricate guitar solos as an introduction, and swells into some very powerful sentiments carried by a bedazzling rhythm section and an optimistic voice.

THEY ARE a voice of community, family, and social justice that grows out of work of not-for-profit organisation Children’s Ground. The soul-thumping eight-piece blend rich cultural sounds with a deliciously heavy onslaught of rock stylistics.

THEY SOUND LIKE a joyous fusion of western beats and Aboriginal Australian colour – which ultimately, after you listen to them, is an excellent example of integration over segregation. Tinges of reggae, folk and rock meddle with the vibrancy and powerful collaborative efforts of the band’s motley crew of songwriters.

YOU'LL DIG THEM IF YOU LIKE Bob Marley, Fever 333, and any other band that has a strong sense of self and cultural identity, who want to use their creative platform not just for awareness, but to bring joy and excitement through their music.

YOU SHOULD CHECK OUT Last year’s album Struggle: a simply mind-blowing, defiantly eclectic demonstration of the pure magic that can occur when you put together a group of sensationally talented musicians.

IT IS the solo project of Melbourne artist Jordan Lalchand, who after years of session work and performing with bands, has stepped away to make his mark in his own bold and beautiful way. Currently working toward the release of his debut EP in 2020, Lalchand runs with a very intriguing slogan – that he’s a “music-making Malaysian Melbournian”.

HE SOUNDS LIKE a whole damn lot. Musically, Lalchand draws on many influences – that much is clear, but it’s the resourcefulness and imagination of his arrangements that flaunt his talents as a solo musician. Triumph and deliberation are sensations often stirred by Lalchand’s music.

YOU'LL DIG HIM IF YOU LIKE Karnivool, Alter Bridge, A Perfect Circle, Dead Letter Circus, The Butterfly Effect… The list goes on! Ultimately, there’s no nuance occupied in any of Lalchand’s work that you won’t be able to gel with. The intricacies of his arrangements come at full flavour with much to be taken away.

YOU SHOULD CHECK OUT latest single “Feast”, featuring vocals from Ryan Wilson and an accolade of local talent. Lalchand pulls on the aptitudes of many other fantastic musicians, who execute intricate rumbles and variants in rhythm, and develop a sense of seeping colour that just explodes off the spectrum.

SHE IS a young whippersnapper with talent aplenty, 20 years old and native to the sunny isle of Perth. And she’s already causing quite the stir; the singer-songwriter has developed a glowing reputation for her relatable and clever songs, already taking to the road in coveted support slots with her idols Abbe May and Jen Cloher. The opportunities for an acquaintance with Genve on an international scale will occur when she performs at SXSW in Austin, Texas in March.

SHE SOUNDS LIKE indie leanings with a blues-rock hue gracing her rich vocals and sombre guitar work. The notes she produces with her voice dance on your ears, and her guitar carries a spirit all its own – largely in part to the natural demonstration of the acoustic.

YOU'LL DIG HER IF YOU LIKE Abbe May, Dean Lewis, Jake Bugg and Neil Young. If you’re into emotive and powerful commentaries on all aspects of life, this is the sound for you. Indie and folk-rock have a new face, and it’s that of Carla Geneve.

YOU SHOULD CHECK OUT her recently released self-titled EP. In particular, tracks “Things Change” and “Yesterday’s Clothes” offer an unparalleled view of Geneve’s personality as a performer and person, and serve as the best way to enjoy her well-developed technique as a guitarist.

THEY ARE a country and blues duo giving the genre a brand new look. Since 2011, Andrew Cavalieri and Matt Golotta have been performing shows in Sydney, and have shown their might at festivals such as the Tamworth Country Music Festival, the Gulgong Folk Festival, the Hill End Arts Festival and the Parramatta Park New Years Eve Celebration.

THEY SOUND LIKE some truly fun-loving blokes who aren’t afraid to get creative, naughty, and silly with their sound. That’s not to say they aren’t sensational at what they do, though! Bolstering ripping guitars, banging banjos and some mind-melding harmonica work on top of a grooving mandolin, The Sweet Jelly Rolls are the poster kids for what may be the most underrated scene in Australian music.

YOU'LL DIG THEM IF YOU LIKE... Erm… Well, off the top of the ol’ noggin, it’s hard to shove these guys into any one section. The Sweet Jelly Rolls class themselves as “real country music and old time blues,” and they’re not wrong. If you like The Teskey Brothers or Chris Wilson, and can imagine either outfit being a little more psychedelic or having a tinge of ADHD, then you’ve got yourself some Sweet Jelly lovin’.

YOU SHOULD CHECK OUT Smokin’ Darts & Breakin’ Hearts. It’s one of those fun-loving, smile-inducing releases that are out for a good time but will also blow your mind. Between the dexterity, the skill and the class (or, humorously, lack thereof), words won’t do this release justice. The lashings of Australiana country and blues lacing this release need first-hand ingestion to be truly understood and appreciated.

THEY ARE a deadly fierce prog-metal outfit crashing down the gates of Adelaide to cover the nation in a wild amalgam of extreme melody and zealous rhythms. Freedom Of Fear were well-received at this year’s BIGSOUND showcase, and are only continuing to dominate an admittedly very complex and technical genre.

THEY SOUND LIKE a very particular brand of crunch and craw that scribe Anna Rose adoringly brands “vomit metal” – heavy on the gutturals and unforgivingly brutal. Definitely check these guys out if you froth a good wall of death. The double-pedal bass drumming and the wonderfully demonic screech of the lead guitar is certainly attention-grabbing.

YOU'LL DIG THEM IF YOU LIKE other fervent and septic styles of death metal – the more unleashed Deafheaven cuts, Alcest, Children Of Bodom and the like. Or, if you like the idea of Dragonforce coming down with a nigh-on fatal disease, then Freedom Of Fear are the band for you.

YOU SHOULD CHECK OUT "The Consciousness Of Misery” from their most recent offering, Nocturnal Gates. The cut is exemplary of some pretty powerful proficiencies in each of Freedom Of Fear’s members – brutally majestic and incredibly gripping.