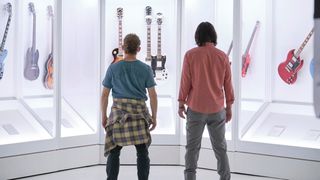 Bill & Ted stare at just a few of the 30+ Gibson Brands electric guitars that appear in Face the Music (Image credit: Orion Pictures)

When news of a Bill & Ted threequel first broke, decades after the beloved originals, it’s fair to say it set a few alarm bells ringing. Could Keanu Reeves and Alex Winter recapture the fresh-faced magic of those original performances? Would the film end up a pastiche of the ’80s rock it previously glamorized? And would the production team get those all-important guitars right?

Audiences and guitarists alike needn’t have worried: Bill & Ted Face the Music is a most triumphant celebration of all things electric guitar – past, present and future. In their quest to write a song that will unite the galaxy (no pressure), the titular duo once again travel through time, join a band composed of the greatest musicians in history, and learn a lot about the power of music – and themselves – in the process.

It’s sharply written, funny and surprisingly heart-warming – and, crucially, delivers a killer contemporary soundtrack and attention to detail on the guitar front.

That’s largely thanks to the watchful eye of Jonathan Leahy, an in-demand film and music supervisor with credits on mega-series Girls, The Society and Good Girls to his name. A player himself, Leahy was well-placed for the job.

“As a guitarist and just as a kid who grew up in the ’80s and ’90s, this franchise means a lot to me,” he enthuses. “The first two films are just so iconic – they’re cult classics and pop culture signposts that mark the end of the pre-grunge era.

“When the director [Dean Parisot] called me about doing the third film I was both thrilled and terrified. It was a huge risk to revisit San Dimas after all these years, but the script was great and Alex and Keanu were on board, so how could I say no? Getting the gig was a guitarist’s dream come true.”

There are few movie franchises where getting the guitars right is more important – and having a music supervisor who actually plays proved integral to the film’s six-string accuracy.

Co-producer Ashley Waldron quickly signed Gibson Brands as the movie’s official guitar partner, providing the iconic instruments that Bill and Ted use to save the world, not to mention countless other electrics from its stable of marques, including Epiphone, Kramer and Steinberger. Waldron brought in Leahy and the Gibson team to ensure music and guitar-playing remained a central focus of the story.

“I’m a gear guy so the instruments you see on camera are important to me, and I knew they’d be important to fans, too,” Leahy explains. “I took a look at the most important guitars featured in the first two films, the Steinbergers, the SG and the Flying V, and discussed with the director and supervisors what we wanted to do in this third film.

“Gibson Brands is home to all of these instruments, as well as Epiphone and the shred sled supreme, Kramer. We connected with Gibson very early on and they were most excellent partners on this. At this point, they feel like family – they worked really hard to make sure the film had everything it needed, all the way up to the Weezer video which we just shot.

“They’re caretakers of Keanu’s hero guitar, and sorted out the logistics to make sure that the guitar Rivers [Cuomo] plays in the video is the same guitar Keanu plays at the end of the film. They are a most dependable bandmate.”

Gibson provided over 30 guitars for the movie from its various brands, including specific models that were absolutely essential to filming – instruments that Leahy was quick to identify.

“When Bill and Ted travel to the future, having Steinbergers in that scene was something that I absolutely insisted upon,” he recalls. “Fans would demand it, and they’d be right.

“When it came to the big guitar solo at the end, it seemed fitting that they play the same type of instruments – SG and Flying V – that they play at the end of Bogus Journey, except now they don’t have the custom paint jobs; they’re more simple, classic, mature, kind of reflecting that Bill and Ted have grown up.”

Asked which guitar he wanted to take home after filming, Leahy names a Tobacco Burst Les Paul Standard ’50s – albeit for reasons beyond the usual look and sound.

“That guitar has a history which is similar to the years-long struggle to make Face the Music,” he explains.

“Decades after the last Bill & Ted movie, we went back to the original formula, were respectful of the characters people already knew and loved, but also created something new at the same time. It feels a lot like the rebirth of Gibson in the JC [Curleigh] era, and in particular the love and care that they’ve put into the new line of Les Pauls.”

Using guitars not only as props but as instruments that tell a story in themselves is emblematic of Leahy’s keen-eyed approach. That dedication was echoed by Reeves and Winter, who – although both bass players originally – knuckled down to not only perform live on set, but also add a couple of new musical strings to their bows.

“There’s a lot of music performance in the film and Alex and Keanu really wanted to get it right, so I arranged to have instructors work with them on a bunch of different instruments,” Leahy reveals.

“Keanu plays bagpipes in one scene, and he was determined to get that right, so I arranged for a professional player to work with him. After a couple lessons, they told me that Keanu was the best student they ever had.

“Same thing with Alex playing acoustic and singing Those Who Rock - they were really dedicated to being real with the music performances. The guitar and vocals you hear in that scene are captured live, performed by the actors. I had Wendy Wang, who co-wrote that song, fly to New Orleans to work with the guys to get it right. I feel like it’s the musical equivalent of doing your own stunts.”

A soundtrack to unite the world

Besides getting the action and aesthetics right on set, Leahy had another mammoth task before him: the soundtrack. While it would have been easy to rest on Bill & Ted’s ’80s/’90s metal laurels, the supervisor had a clear vision for the soundtrack: to represent guitar playing in 2020.

“This is a Bill and Ted film, and I knew from the beginning that I wanted to make the soundtrack a celebration of the electric guitar,” Leahy says. “Not in a retro or nostalgic way, but in a vital this-is-what’s-happening-right-now way.”

Alongside Reeves’ bagpipe showcase are huge tracks from Weezer, Mastodon, Lamb of God, Cold War Kids and FIDLAR – several of which were written especially for the movie. It turns out the impressive roster didn’t take much convincing.

“There is a massive amount of love for this franchise in the music community, and among guitarists in particular, so when I approached artists I was met with enthusiasm and excitement,” Leahy says.

“When I’m working on a movie, my job is to put the right songs in the right spots. So when Death gets in a SWAT van in the bowels of hell, then yells, ‘Let’s rock!’ and slams down his scythe launching them through seven layers of the underworld, yeah, you better believe I’m calling Mastodon!”

Alongside Mastodon at the top of Leahy’s wishlist was Weezer – who were coincidentally working on their still-to-be-released album of guitar heroics, Van Weezer.

“I approached Weezer early in the process for a whole bunch of reasons,” Leahy says. “Number one, they’re a great band. Number two, Rivers is down to shred. They’re capable of making epic rock that has a joyful, adolescent quality, which reminds me of Bill and Ted jamming in that garage back in 1989.

“They’re an American rock institution that wields electric guitars with pride, and their first gig was on the same bill as [Keanu Reeves’ late-’90s alt-rock band] Dogstar, so it just seems like it was meant to be. And has there ever been a more Bill & Ted lyric than ‘in heavy metal we trust’?”

Leahy is effusive in his praise for every artist on the soundtrack – from Big Black Delta’s Jonathan Bates “embracing his deepest, darkest Floyd Rose fantasies” for a pair of tracks, to FIDLAR’s ferocious effort and Cold War Kids’ anthemic closer – but in terms of composition, one song stands out as a highlight.

“Maybe the most fun we had was working with Lamb of God, who agreed to build their song, The Death Of Us, around the prison chant that the very muscular Wyld Stallyns are performing in the yard,” Leahy says.

“Again, we got to work with living legends to create something special just for the movie. Another dream come true. That track is a beast.”

Speaking of beasts, there was one virtuoso that immediately sprang to mind when it came to filling the much-coveted “air shredder” position: Tosin Abasi.

“He was one of the first people I called,” recalls Leahy. “I wanted to make sure that when Bill and Ted play air guitar in Face The Music you hear something incredible being played by a living legend, just as we heard Steve Vai in Bogus Journey.

“Tosin and his Animals as Leaders bandmate Javier Reyes join Wyld Stallyns on the soundtrack version of Face the Music, which I also thought was fitting since Steve Vai accompanied Kiss on God Gave Rock ’N’ Roll To You.”

This sense of continuity, in tandem with themes of growth and modernization, ensures the movie and its soundtrack act as a true love letter to the electric guitar in 2020. They celebrate the instrument’s heritage of excess, but also portray a future – and in the film, that’s taken quite literally – where it still reigns supreme. And to that, we can only say party on, dudes.

Bill & Ted Face the Music is available to stream on demand now.