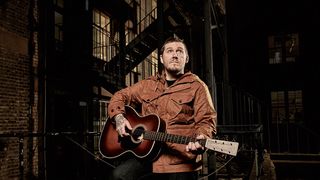 “I feel that in my career, everything I’ve hinted at, from Sink Or Swim to The ’59 Sound to playing with Bruce and all that stuff, everything has been a hint and a partial viewing to what I truly hear in my heart and I’m trying to do. And I’ve never achieved it, and I’m demanding of myself that it will happen.” Brian Fallon told us that just over a year ago.

So today, as we read those words back to him when we meet in the cafe of London’s Rough Trade East record shop to discuss his new solo album Local Honey, we have to ask him – did it happen?

“I feel that this is step one,” he smiles. “The door is now opened, walked through. I have no choice but to walk forwards. I honestly feel that when I’m done making records this will have been day one. And it felt good though to get there, personally. Even if the record didn’t do well, I feel like I’ve achieved something already.”

If this is a new start for the Gaslight Anthem chief, it’s quite a statement to begin with. Local Honey is eight songs but feels complete because its writer makes every moment of them count; in place of the punk rock fire of old there’s a restraint and striking honesty that feels just as powerful. But it could only have come from a sea-change in Fallon’s approach as a player and a person.

“If I hadn’t done all those lessons I would not have been able to play or write the songs,” Fallon admits to us. Last time TG met the New Jersey songwriter, he told us he was deep into a quest to improve and learn more as a guitarist – aside from mainstay influences like Dylan and Tom Waits, he was absorbing knowledge from diverse sources including Mark Knopfler’s fingerstyle and YouTuber John Tuggle’s blues technique.

But Fallon had also began playing piano live, too, reworking Gaslight favourite The ’59 Sound alongside his varied solo work to spine-tingling effect. Local Honey now sees all that time paying off. Big time. The album is a detailed but moving work that mixes acoustic fingerpicking with layers of electric and keys to sidestep genre pigeon-holing.

Somehow he’s managed to carve out something unique and contemporary for himself alongside The National and The War On Drugs producer Peter Katis. This isn’t Brian Fallon’s rootsy Americana album.

“If you left me to my own devices it would probably be more traditional,” he admits. “There would have been fiddles on it. I think that’s why I went to Peter. I think people make traditional Americana records better than I could. I didn’t want to compete. Because I’m the kind of person where if I can’t at least do well, I don’t want to compete. I’m not going to run you in a race because I can’t run.”

Listeners will also feel a distinct shift in his lyricism; while the tragic Vincent is Brian’s first fully fictional tale of murder and tragedy, he’s more personal and present than ever before elsewhere.

You Have Stolen My Heart is his purest love song; on moving opener When You’re Ready, he’s a father talking to his young daughter, and 21 Days suggests his personal shift from a darker time beneath the guise of what seems to be a bittersweet goodbye to cigarettes. All are his truths.

All are his truths. “I’ve always had this wall that I’ve put up,” Brian confesses, the warm candour of the album very much evident in person today. “Even the most personal songs I’ve written before I never opened up all the way. I guess it’s maybe the age or the place I’m at in life where I think, I’m just going to do this and I’m not worried about hiding anything. I don’t care... Well, it’s not that I don’t care because I do care, but I’m OK with being uncomfortable; I’m OK with being exposed.”

If 21 Days is a confessional born from “a lot of therapy” its musical development was just as complex. Intimate and slow building on record with vocals verging on spoken word at first, it actually started as full-bore rock song truer to the Gaslight days before Brian reworked it over painstaking weeks following Katis’s admittance he wasn’t sure he could produce that kind of music when he heard the original demo.

“That song, I tell you, it was like building a house one screw at a time. It was crazy. It was so difficult. But we recorded it with me yelling and recorded it with me quiet and I swear to you it hit harder when it was quiet. And I was like, I don’t believe this just happened. But that really opened my eyes to a lot of things.”

It’s indicative of a writing and recording process that saw Fallon willingly leaving his comfort zones as a guitarist, while also embracing others. Songs like I Don’t Mind (If I’m With You) and Lonely For You Only were slowed right down while overdubbed electric parts and keys were taken in and out of the mix in pursuit of the perfect equilibrium of sounds and textures we now hear.

Alongside some wonderfully inventive drum work from Kurt Leon, there are details that become clearer over repeated listens – including electric licks from Brian’s blonde Custom Shop Tele through his ’66 Fender Deluxe Reverb, aka “the best amp ever”.

“With this stuff, I was looking at the way Daniel Lanois plays,” he notes. “He’s got that band Black Dub that he plays in, and if you listen to his guitar playing it’s extremely held back but tasteful. Even the Tom Waits records Keith Richards played on, like Rain Dogs, he would play these extremely tasty things but it was way in the back. One note had to mean everything.

“If I didn’t go through the last two years, and I’m still doing it... I’m learning. I’m way into Julian Lage now, I’m learning all these different things. But you’ve got to hold back, that’s the secret. Hit the right note at the right time."

Rhythmically, Fallon hasn’t gone jazz on us. Quite the opposite.

“I started to learn all these different chord progressions because I’ve always used I-V-VI-IV a lot [see hundreds of hits from YMCA to Every Breath You Take, Let’s Get It On, Stand By Me, NIN’s Hurt; the list goes on] and variations of that. But you know, I like that chord progression still. And I said that to Peter, ‘I learned all this jazz stuff so should I be using these chords?’ And he’s like, 'No, because it’s not sad. Use the sad chords. That’s what’s good.'

“It kind of gave me permission. I’m using the chords I want to use. Even the song Nocturne by Julian Lage, it’s B minor to A and then D . It’s the same chord progression I use, but although it’s like this really fancy jazz song, it’s kind of the same thing.”

Fallon’s clearly warming to a theme here. He turned 40 a couple of days before we meet, and there’s something key to be learned from his path as a player to get to this point – namely growing while embracing the things that make up your identity.

“I think it’s a thing that’s my thing. If you boiled it down, it’s the melodies of those chords. Well, some people might say to me, ‘That’s boring, you use the same chords all the time’. I think that’s pretty creative that I’ve written, like, 95 songs with similar chords. I don’t know about you, but I think I’m doing all right. You know what I’m saying? [laughs]. I know what the chords are, I’ve got the 7th, the 9ths, the 11th... But I don’t care.”

Brian’s example of another key influence whose nuanced songs were sometimes misunderstood as ‘simple’ is telling. The parallels aren’t hard to draw.

“I read in an interview with Tom Petty, a guitar player came up to him, a friend of his, and said, ‘I’ve got this cool chord and I used it in a song.’ And Petty said, ‘Why? Do you know why that chord’s not been used in a song before? Because it’s not good.’ Fair enough, because you know what works? G, D and C. So leave it to Tom Petty, bless him.”