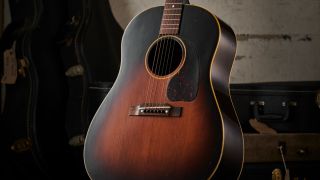 The Gibson J-45 ($45 jumbo) flat-top appeared in 1942 and supplanted the similarly round-shouldered 16-inch-wide Jumbo 35/J-35. Considering the shortages of supplies and labour across the industry during wartime, releasing a new guitar model was a challenging venture for any firm.

“In war as in peace,” reads a Gibson press ad. “Only a Gibson is good enough… War materials have the right of way at Gibson… We are making some instruments, and some strings, but in limited quantities.”

Evidently, Gibson was making provisions for the hard times ahead, and yet despite such austerity the company managed to produce an acoustic guitar that was not only a success at the time but has since become recognized as one of its most iconic designs.

The J-45 – Gibson’s “workhorse” acoustic – may not be the fanciest as far as flat-tops go, but it has endured over the decades as an instrument of choice for many, including such notable guitarists as Lightnin’ Hopkins, Buddy Holly, David Gilmour and Elliott Smith.

With its spruce top and mahogany back and sides, a typical J-45 may be thought of as the Gibson equivalent to Martin’s classic square-shouldered D-18 Dreadnought model, which appeared from 1931 onwards, via the short-lived D-1 (a guitar that was, in turn, developed from the original round-shouldered spruce/mahogany Martin/Ditson 111 Dreadnought design of 1916).

The shortages of materials during the war, however, meant that some J-45s – invariably sporting the wartime ‘Only A Gibson Is Good Enough’ banner headstock decal – were constructed with maple backs and sides, while others received mahogany tops. All had a Sunburst finish as standard.

The earliest examples feature a very full, rounded neck profile (often referred to as ‘baseball bat’ necks), which may present an issue for some in terms of playability. For others, the extra mass appears to improve tone with respect to increased volume and sustain.

The first J-45s are also notable for their ‘firestripe’ celluloid teardrop pickguards, but by 1943 the more commonly recognised tortoiseshell celluloid type was standard. In 1955, the pickguard markedly changed shape from a teardrop appearance to a more elongated profile extending along the treble side of the fretboard and featuring a point facing outwards towards the upper treble bout. Around the same time, an additional (20th) fret was added to the J-45’s no-frills rosewood/mother-of-pearl dot inlay fingerboard.

By the following year, a height-adjustable saddle was made optional and would become standard by the early 60s – a mod con that still faces much criticism among aficionados, despite a large amount of popular music having been made and enjoyed using guitars of this type.

But perhaps the most questionable of design alterations during the 60s was the introduction of a plastic bridge. These are most commonly seen on J-45s from 1963 to early 1964, before Gibson returned to using a rosewood ‘upper belly’ bridge.

Guitars of the post-40s/50s era can generally be distinguished by a Cherry Sunburst finish introduced in the early part of the 60s.

In 1969, the J-45 received its most radical design alternation: a square-shouldered body profile and the scale was lengthened from 24¾ to 25½ inches. It remained relatively popular in this form in the 70s, but sales steadily declined until it was eventually discontinued in ’82, before being reintroduced in ’84 in its former guise, resplendent with round shoulders, a teardrop pickguard and a 24¾-inch scale length.