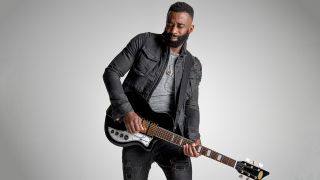 Anyone that caught Eventide’s On The Road interview with American session guitarist Curt Chambers earlier in March will have witnessed the talents that earned him a spot playing for the biggest names in rap, next to the legends of rock ’n’ roll as well as his fair share of modern country greats.

In the video he describes their H9 as a “life-changing pedal - used on the Dr. Dre Compton record and for the last four years out of nine playing with Eminem”. It would be no exaggeration to say the session ace has been keeping busy...

StraplineThe sought-after session man on playing with Eminem, Dr. Dre and Travis Barker, and why he loves his 50th Anniversary Strat Reissue

"We hung out afterwards and really hit it off. I’ve been friends with them ever since and love their equipment, the H9 has stayed on my board.”

It makes us wonder - with such a diverse resume at such a young age, what other pedals have managed to keep their spot on the board...

“Well, let’s have a look, I’m sat in front of my mini studio board,” he grins, before moving his camera over the floor in front of him. “I’ve got a Strymon Timeline [delay], an MXR Timmy Overdrive for that Nashville sound using a Tele, an old school Rat, the Xotic SP Compressor and EP Boost which has that whole Echoplex sound.

"There’s also a Dude pedal made by J. Rockett Audio. One of my friends said they couldn’t get it to sound good but I have no idea why, that thing sounds fat. I also use their Archer pedal for a little more brightness and grit… but it’s still good for a Tele. It has a lot of mids and can really punch your face, if you’re looking to do that!”

What are your earliest memories of playing music?

“I grew up around some incredible guitar players in church. That church had The Campbell brothers, Robert Randolph and a whole movement of black guys playing pedal steels and guitars. All those guys were incredible.

"I was exposed to some aggressive rhythm players but it was already innately in me when I was in my mother’s belly! But maybe the decision to focus on guitar happened somewhere in between 11 and 13 years old, I knew this thing would be with me for a long time.”

That said, you’ve also studied drums, piano and a few other instruments too!

“Yeah, I grew up around a lot of musical people. And because I’m a multi-instrumentalist, a lot of my choices and ideas come from playing drums and piano. I studied jazz piano and drums at William Paterson University in New Jersey.

"And that influenced my style as a guitarist, listening to Dave Weckl Band and Chick Corea. I didn’t really dive into other guitar players until I was older because I wasn’t allowed to listen to secular music. So it wasn’t until later when I jumped into Clapton, Page and Hendrix.

"There’s always a discussion about the name that comes next but Prince was one of the most incredible guitar players of all-time and very underrated.”

So when did you get your first big break as a session player?

“I came up on the tail-end of a lot of records being made in Philadelphia, with a lot of artists like Jill Scott, The Roots and D’Angelo and all that funky neo-soul stuff.

"My earliest session was at Larry Gold’s studio, which was an incredible place - so many records were made there. That felt like my first big break, playing on records that [The Roots drummer] Questlove was producing or Jazzyfatnastees or stuff that James Poyser was working on, like a Musiq Soulchild song.

"I played on quite a few records at Larry Gold’s! It was all quite terrifying.”

Eventually you got the gig with Eminem. That must have been a bit of a dream gig...

“It was great working with him. Eminem is a total nice guy, always super-cool with the guys in the band. It was a great opportunity because when I was finally allowed to listen to secular music, I’d ride around listening to Tupac, Dre and other guys.

"I remember first hearing Eminem and seeing a video, and was totally captivated by it. I’ve always loved the energy in hip-hop music. And I love matching that energy with aggressive guitar playing… what guitar player doesn’t love that?

"So I got to play some cool rock licks with such an amazing lyricist and rapper on a huge stage. I’d rock out and feel my Mesa stacks behind me… it was loud! There was a lot of bass. I don’t know if you’ve seen any of the recent Eminem shows but they’re very musical - he allows us to put cool transitions in the set and make it dynamic but still hit hard. It was very fulfilling playing some of my favorite songs.”

And you’ve also recorded with him and Dre too...

“I did a few tracks with Enimem in the studio because I worked with Dre too in LA. We did Medicine Man, on the Compton record. I’m a producer and writer on that song, which has Eminem, Candice Pillay, Anderson Paak and Dre. It’s an amazing record.

"Also, a few years back Eminem had a single out called Space Bound and they let me do a remix and put my own twist on it. I ended up releasing it, as it’s one of my favorite songs - which they were nice enough to let me do. I love those guys, there’s a big family over there for sure!”

What do you think musicians like that are looking for from their backing band?

“It changes… it’s all about the vibe of the record at the time. Those guys are great creators, they make musical bibles. Dre is one of the greatest and he’s a fan of music himself, so it’s down to what he’s hearing at the time and what the record needs.

"It might be a 12-string acoustic or some straight rock guitar or super clean for a George Benson jazzy vibe. It just depends. It’s always changing so you gotta be ready for everything. It’s definitely not a one-trick pony atmosphere there at all!”

“Working with Travis was heavy… a real honor. We did a few things together including a Jay Leno television appearance. He had this kid called Kevin on bass, a super amazing mastermind of a player, and I was on guitar.

"Travis is one of the greatest drummers and a super nice guy too. It felt really heavy, man! When I started listening to secular music I was in a rock band - I was a heavy blink-182, Green Day and Linkin Park fan.

"It was fun to play with Travis and hear his take on hip-hop. We did an awards show with Rihanna, Travis and Eminem... and Travis just brings it. He lays it down so thick. He’s driving that train and you’re just trying to hold on the whole time [laughs]!

“And I learned a lot from B.B. King. I remember watching him with my father and he said, ‘Man, he sure knows how to not play many notes and still say a lot!’ I was mesmerized. He could say so much with just one note. I took a lot from that, saying a lot but playing less. I’m still learning how to do that… I can’t say I’ve mastered it at all.”

What are the main differences when you switch into a country rock gear for sessions with artists like Chris Young and Tyler Rich?

“A lot of that country stuff uses hybrid picking, so you need to get used to using your fingers. In church, there was a thing one of the guys used to do that would involve playing a lick using the pick for the bass notes and fingers for the dominant hammer-ons, with a very defined 1234 rhythm. And he’d chromatically descend back down to the root, which was a great exercise to learn.

"I like those country sounds, especially players like Johnny Hiland, Brad Paisley and Vince Gill… those dudes are smoking. Andy Wood is brilliant too.”

There’s a tasty A minor pentatonic lick at the end of your latest single, Good Thing. What do you think helped most with those faster, two-note-per-string lines?

“I was going for that Bonamassa thing there, creeping down the pentatonic scale. I picked every note to make it punchy and get it all out. I worked really hard on those two-note-per-string runs when I was in middle school.

"I would go through the minor pentatonic shapes chromatically, one at a time. I played this in my bed for one week and started to get the technique down and then was able to build it up from there.

"My Strat helps too, I have my main one with me right here. It’s a 50th Anniversary reissue thing I got around 2014 and looks beautiful. It has Lollar pickups fitted in there and they sound fat.

"It’s the Special S ones I think, which are thicker in the mids. I love how they help you stick out more in the mix when you are playing your chords... it’s a seriously amazing instrument.”