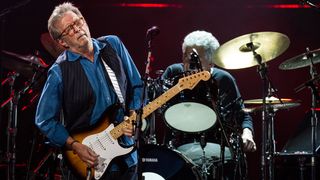 Although he carved out his own corner of rock and blues history as a member of the Yardbirds, John Mayall's Bluesbreakers, Cream, Blind Faith and Derek and the Dominos, Eric Clapton has had one hell of a career as a solo artist.

It's a career that started in 1970, took a hazy little hiatus, then picked up where it left off in the spring of 1974. Since then, Clapton has sold millions of albums and has been surprisingly prolific; his latest album, 2016's I Still Do, was his whopping 22nd solo effort.

Which is why it's a little weird that the only solo Clapton songs anyone seems to know - or at least request at my band's gigs - are Wonderful Tonight, Cocaine, Forever Man or After Midnight.

Anyway, I figured it was time to shed some light on 13 sadly overlooked solo Clapton tunes. Actually, it's not sad at all, since none of the songs on this list will ever share the same overplayed fate as the classic tracks mentioned above.

In terms of criteria, the "overlooked songs" on this list were never hits, and, even if they were part of Clapton's live shows at some point, he hasn't performed them in ages. Also - and most importantly - these songs are strictly from Clapton's solo studio albums and have nothing to do with Cream and his other bands - or his guest appearances on other people's albums.

They also have nothing to do with his live or collaborative albums, including Riding with the King (recorded with B.B. King), The Road to Escondido (recorded with JJ Cale) or 2014's The Breeze: An Appreciation of JJ Cale, which is credited to "Eric Clapton & Friends."

These songs are not presented in any particular order. Enjoy!

This isn't only the best song on this list; it's one of the finest songs Clapton has ever written. Besides appearing on his debut solo album, Easy Now was the B-side of After Midnight.

Because of its stripped-down arrangement, it isn't dated or 'stuck in 1970' like a lot of other songs on Eric Clapton.

Even music critic Scott Floman has called the song "comparatively overlooked" and noted that "[the] simple yet effective ballad featuring Eric's ever-improving singing ... is one of this underrated album’s most underrated efforts."

Clapton knew a good song when he heard it - even if it was written by his recently hired second guitarist, a super-talented young American named George Terry. Clapton liked this upbeat rocker so much that he closed his "comeback" album (461 Ocean Boulevard) with it.

There's some fine guitar playing throughout, not to mention a catchy riff and a meaty breakdown.

At the core of The Core is a crunchy killer of a riff in A. One can’t help but wonder if the song, an almost-nine-minute-long duet with Marcy Levy, would have been a hit had it been edited down and released as a single.

It has a lot going for it: a catchy bridge, lyrical depth, a kick-ass sax solo by Mel Collins and one of Clapton’s most exciting guitar solos from his 'laid-back' mid-'70s period. At the 4:13 mark, he unleashes a furious barrage of notes that recalls the Clapton of 10 years earlier.

Clapton performed this bluesy Ray Charles cover regularly when he was promoting Journeyman in ancient times, but he has most certainly let it fall by the wayside since then. This is, of course, expected, but still a shame.

If Eric Clapton and George Harrison had recorded an album together in the mid-'70s, it would've sounded a bit like this.

Of course, there is a guitar-playing George on this tune - George Terry - who tackles the bulk of the slide work as Clapton opens up his bottomless bag of licks during the song's fadeout.

Money and Cigarettes, Clapton's final album from his No Reason to Cry/Slowhand/Backless/Another Ticket period, is actually pretty fun and hosts a bevy of engaging songs, including Pretty Girl and this one, a country-rocking guitar duel with the great Albert Lee.

Like Derek and the Dominos' Layla and The Beatles' Something (and several other tunes), this song was written about Pattie Boyd.

Peaches and Diesel is a shimmering instrumental tune that closes out Clapton's triple-platinum 1977 album, Slowhand. It was released as the B-side of a single, and often has been compared to its popular A-side, Wonderful Tonight.

The last minute and a half of Just Like a Prisoner might represent Clapton’s mid-'80s high-water mark, at least from a shred perspective. The song features what could easily be considered one of his 'angriest' solos. He even keeps playing long after the intended fade-out point, until the band stops abruptly.

Maybe he was upset about the overpowering '80s production, ridiculous synthesizers and obtrusive, way-too-loud drums that threaten to hijack the song at any moment.

Considering that Clapton had big-time success with After Midnight and Cocaine, Travelin' Light is certainly one of his lesser-known JJ Cale covers.

10. Love Comes To Everyone

Clapton has recorded several George Harrison compositions during his career (Run So Far, That Kind of Woman, Badge), but they were songs George had written for (or with) Eric. Love Comes to Everyone is an out-and-out cover of a song that appeared on the former Beatle's self-titled 1979 album.

Harrison's version features Clapton on guitar and Steve Winwood on keyboards, and both guys also appear on Clapton's 2005 version. Winwood even copied his own 1979 keyboard sound when recording the Clapton version, which is pretty damn cool.

From the Cradle - Clapton's long-awaited "return to the blues" - made a splash when it came out in 1994. But I don't remember anyone pointing out the stellar Reconsider Baby, Clapton's cover of a 1954 Lowell Fulson tune.

It's hard for Clapton (in terms of his guitar playing) to sound 'vintage' and rough around the edges, but he pulls off both - perfectly - here. And then there's his biting tone, which - to my ears - has trace amounts of his mid-'60s Bluesbreakers edge.

Speaking of blues albums that made a splash, let's not forget Me and Mr. Johnson, EC's 2004 ode to the legendary Robert Johnson.

While it features several songs that - let's face it - sound a lot like so many other I-IV-V blues songs recorded by Clapton since the early 2000s, Stop Breaking Down Blues stands out as a fun, upbeat foot-stomper.

13. Lonesome And A Long Way From Home

Our list ends where it began - with a track off Clapton's self-titled debut album. I'm guilty of ignoring this record because I find horns, tambourines and screaming background singers cheesy and annoying, regardless of when the song was recorded. However, there's no denying there are some fine tunes on this disc, not to mention Clapton's famously pointy but scooped 1970 Strat tone.

If you ignore the horns on this tune (I'm really trying...), which was written by Delaney and Bonnie Bramlett and Leon Russell, you can hear the birth of Clapton's mid- to late-'70s sound.